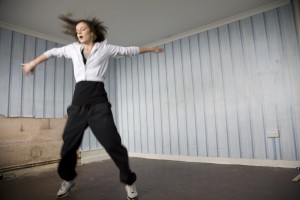 It’s everywhere, is where it is. The odd critiques of “Red Road” and “Fish Tank” that have asserted Arnold tells familiar stories with familiar characters are off the mark. The live-through-this intensity of her storytelling is charged and fresh. The English director started her career relatively late, but her first two short films, “Dog” and “Milk” were screened at Cannes in 1998, and her third, the twenty-six minute “Wasp,” won the Oscar in 2005. Her 2006 feature debut, “Red Road,” shot on digital video, exploited a fresh, bold palette in the story of a policewoman whose job is to watch Glasgow’s banks of surveillance monitors. The modern paranoia and contemporary sexual violence that grows from Arnold’s unflinching film (and Kate Dickie’s intent, sere performance as the troubled, vengeful woman) are nightmarish yet haunting. The film began as a challenge by Lars von Trier’s company, that three directors with the same outline would go out and make a film with the same characters and actors, but in Arnold’s capable hands, it was so much more than a stunt. At the time of its Sundance debut, I asked Arnold how much two versions of the same script would be in the hands of any two difference directors. “I’ve always thought that; if you gave a director the same script, you’d get a completely different film,” she said, then laughed. “Okay, maybe the same story, but a completely different film.”

From its opening minutes of anger expressed by its teen protagonist with profane, “unladylike” suddenness and directness, director Andrea Arnold’s second feature, “Fish Tank,” is an electric slice of elevated everyday life. To our good fortune, Arnold amasses her own idiosyncratic observations, different sensations from other English filmmakers who trouble to traffic with class, more tender than Loach and Leigh, and also with a more kaleidoscopic eye than the Belgian brothers Dardenne. She manages to mingle the funny, the sorrowful, the sad, the melancholy and the intimate without a solitary note of false uplift. She’s a poet, really.

The intent simmer of her cop-turned-sexual stalker of the dark, winding back streets of Barmulloch, Glasgow, in “Red Road” is displaced by a 15-year-old’s negotiation of council flats in Essex, near Tilbury, and encroaching womanhood. As Mia, newcomer Katie Jarvis, first glimpsed by the film’s casting director on a train platform in Tilbury Town Station arguing with her boyfriend, is a find: an uncultivated natural playing a council-estate teenager attracted to the handsome new boyfriend (Michael Fassbender) of her single mom (Kierston Wareing). (Consider Fassbender, emaciate in “Hunger,” witty in “Inglourious Basterds” and sexually succulent here, and you arrive at one conclusion: a huge, huge star in just a minute or two from now.) Mia finds escape in emphatically visceral dancing to hip-hop on a boombox in the blasted space of a disused apartment. It’s enacting-out. Arnold, who ended “Red Road” with a piano ballad cover of “Love With Tear Us Apart,” knows when to savor a song, saving her best cue for a wordless scene between mother and daughter to Nas’ “Life’s A Bitch.” Strangely enough, the scene is lighter than air, ready to float away, even as Nas’ lyrics cut to bone: “‘Visualising the realism of life and actuality, fuck, who’s the baddest? A person’s status depends on salary.”

Life’s an itch, too. You’d want to get away from these places. You’d have to get away from these places. The land around is scrubs and bare patches. Life’s tough. In the telling, many gray areas will be colored in. Danger’s everywhere, especially when eyes meet. An especially pungent take on the story’s dances of desire comes in Kim Morgan’s “It’s Hard Out There For A Nymph,” in which she observes, “She has little power in the world save for her youth and vigor and spunk and, as is often the case with teenage girls, her blossoming sexuality—a beautiful thing and yet, a thing that will cause confusion and pain… She’s still a kid. And again, it’s damn hard for a teenage girl.” This is the rare thing that’s captured by Arnold. “Rhythm and framing are so subjective,” Arnold observed to me in 2007, but so is the choice of what to look toward, what not to shrink from.

The language is often scouringly profane and the suburban landscape is the scorched earth of J. G. Ballard-land. The clouds overhead are mere tatters. Yet Arnold’s characters are living in the moment, close to the ground, breathing each second. Notably, Arnold didn’t show the script to her actors, even professionals like Fassbender, sharing the pages only a few days before. What are you going to do next? As a character? As a person? Bring some moods, we’ll play. We’ll play for keeps.

As a visual artist, Arnold makes many quiet creative choices that enrich her loving, lovely tapestry, but her preference for shooting in the almost square, old-fashioned 1.33 ratio and the snapshot esthetic of some of her lighting suggests memories reconstructed from a shoebox of poignant Polaroids. Still, the world is not bleak: there is dance and there are dreams and even in the most dangerous moments, Arnold implies Mia will survive; thrive. Arnold does extraordinary work with actors but she creates a lived-in, to-be-lived-through world for their characters to battle against. In the end, “Fish Tank” is kilometers away from social realism: it’s a blooming nightmare that life’s experience one day will shake this obstinate, gifted director’s characters away from.

The British coming attractions trailer is below.