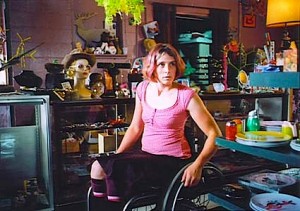 Andrew Bujalski’s the closest thing to a writing-directing auteur among his American contemporaries, many of whom tend toward improvisational methods. His third feature, the brightly-colored “Beeswax,” like “Funny Ha Ha” (2002) and “Mutual Appreciation” (2006) is tightly, yet elusively scripted. The plotting is simple, yet the interactions of his characters fascinate even when the subject matter is the trials of running a small business, in this case a boutique run by Jeannie, one of two twin sisters (played by Tilly Hatcher, whose own twin Maggie plays her sister) who uses a wheelchair (as Tilly does in real life). Set in Austin, the boutique is called “Storyville,” which would hold lovely implication in life—objects with history extend into fresh lives—but onscreen nods toward Bujalski’s penchant for observation rather than overt plotting. Gentle and descriptive, rather than assertive and prescriptive, “Beeswax” is becalmed but mature work. It’s also idiosyncratic: after one viewing, I can’t define its lovely oddness. Beeswax: mind it. With Alex Karpovsky, Katy O’Connor, David Zellner, Kyle Henry, S.J. Anderson, Anne Dodge, Betty Blackwell, Bryan Poyser. 100m. (Ray Pride)