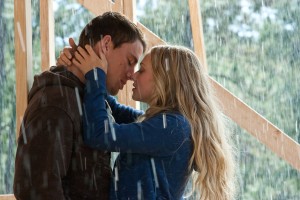 Special Forces soldier John (Channing Tatum, “G.I. Joe”) meets special-education major Savannah (Amanda Seyfried, “Jennifer’s Body”) on a South Carolina beach on spring break. She goes back to class; he goes back to war. Many letters and seven years later, their love makes for a sweetly weepy saga. This is the fifth novel by the prolific Nicholas Sparks to make the screen, preceded by “Message in a Bottle” (1999), “A Walk to Remember” (2002), “The Notebook” (2004) and “Nights in Rodanthe” (2008). And there is already a trailer at the multiplex for his next one, “The Last Song.” Screenwriter Jamie Linden changes John’s first-person voice in the novel to voice-overs for John’s letters. Fans of the 2006 bestseller may be pleased that one death is added to allow for a happier ending. But don’t look for the cinematic equivalents of Sparks’ lines by self-deprecating characters who originally said: “Yeah, I know, I’m a walking cliché” and “I know it sounds trite.” Producer Marty Bowen lauds his director Lasse Hallström: “He’s uniquely untroubled with the notion of trying to make things overly intellectualized, overly self-important, or overly melodramatic.” Nor is Hallström troubled with any of those ambitions, if that’s what was troubling Bowen. “Dear John” is a romance with more poise than impact. Full moons outnumber love scenes in this PG-13 product. Hospital visits, rather than trysts. Its topical nod is not to John’s overseas deployments, but to autistic secondary characters who ride horses and collect coins. With Richard Jenkins, Henry Thomas, Scott Porter and Keith Robinson. 102m. (Bill Stamets)