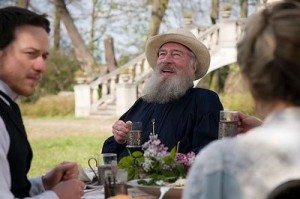 What did Dame Helen Mirren and Christopher Walken get their Oscar nominations for in “The Last Station”? Why, ACTING, my dear boy, for ACTING, for fury and flair and splendid cussedness. A spirited melodrama adapted from Jay Parini’s 1990s novel about the last year of the life of Russian novelist Leo Tolstoy (Christopher Plummer, grand, grandiose), “The Last Station” is vivid and entertaining, largely for the spirited performances by the leads, but there’s delicate work by all the actors enacting the figures settling the affairs of the world’s most famous novelist of 1910. It’s also good to see another sort of romp from Michael Hoffman, who directed “Restoration” and “Soap Dish,” other semi-comic studies of the holding of court. The interlocking storylines demonstrate abiding faith in the power of love: young love, old love, desire, jealousy, pride… and especially old love. With James McAvoy, Paul Giamatti, Anne-Marie Duff, Kerry Condon, Patrick Kennedy, John Sessions, Tomas Spencer, David Masterson. 112m. (Ray Pride)