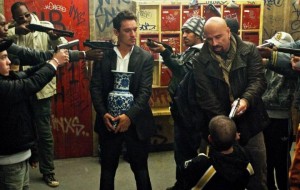 Luc Besson presents a story he made up about two CIA agents making mayhem all around Paris. There’s some good dumb fun bloodshed, but then there are all the bad parts that are not funny bad, just bad. In this goofy romp, James Reese (Jonathan Rhys Meyers, “Mission: Impossible III,” Velvet Goldmine”) is the flunky to a U.S. Ambassador (Richard Durden) who tasks him with discovering which young aide a French colleague is “banging, the brunette or the blonde.” “Both,” reports Reese. “God, I love the French,” sighs his avuncular boss. Reese has another boss. Like Charles Townsend in “Charlie’s Angels,” this unseen CIA overseer assigns him covert errands by cell phone. Go to the airport and pick up senior CIA operative Charlie Wax (John Travolta). They stop off for egg fu yung at a Chinese restaurant where Wax shoots the waiter, cook and busboys. Then he perforates the ceiling where about a ton of cocaine is cached, and tells Reese to collect five or so kilos of the white powdery rain in a giant Chinese vase. Next stop is the lair of a Chinese crime kingpin who deals with Pakistani terrorists who send a suicide bomber to an international conference on AIDS in Africa. Wax is a hot-dogging gunslinger who mentors his new partner. “Tell me that wasn’t some impressive shit,” he prompts Reese, likening an earlier battle royale to a set piece in a Shaw Brothers action film. Other references include a taste for McDonald’s cultivated in an earlier role where he killed a lot, too. Wax here warbles retro pop tunes to his weapons. Among the idiotic asymmetries in the screenplay by Adi Hasak is how Wax enters and exits France with his dear guns. Pierre Morel (“Taken,” “District B13”) directs multi-fatality bouts and chases with genre finesse if not elan. Shifting gears from Travolta’s winking lines as the zany Wax, Morel handles Rhys Meyers’ delivery of Reese’s key heavy lines with zero irony. There’s an Eiffel Tower scene as senseless as an end credit thanking “M. Hulot.” No thanks to the locals who torched ten stunt cars in the notorious housing projects that forced the production to relocate, dashing the dreams of 18-year-old Said Dhabi, who had earlier told The Telegraph: “Travolta is the cowboy who has come to sort out our problems.” With Kasia Smutniak, Yin Bing, Amber Rose Revah and Tam Solo as the “Suicidal Pakistani.” 95m. (Bill Stamets)