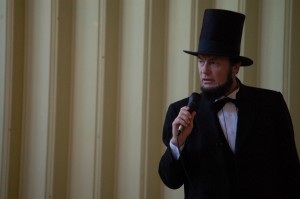 Chicago not-for-profit film production company Split Pillow has produced “Life as Lincoln,” a seventy-minute documentary darling, directed by local filmmaker Caitlin Grogan, about men who make their living—or at least part of their living—as Abraham Lincoln impersonators. “Presenters” is the term they prefer, and as the film focuses on three of these men it shows duties much more rewarding than ribbon-cutting at mall openings. Lincoln presenters are often called upon to appear and speak at schools; they are educators as much as they are entertainers. Grogan’s film, which bounces between Decatur, Indiana, Kentucky and Washington D.C., shines a light on three men who take their jobs as Lincoln very seriously—in many ways, we learn, their calling toward the great president saved their lives.

Grogan, as a child, grew up with family vacations to places such as presidential homes. “I got to thinking one day about those trips,” she says, “thinking about the people I’d see dressed up in period dress, and I started wondering what it was like for those people to go home at the end of the day. It’s interesting sort of in itself, these everyday people taking on a likeness of someone like Abraham Lincoln. I imagined that trying to be Abraham Lincoln from day to day, in classrooms, then having to go home—I imagined it’s something of a challenge to separate yourself from that character.”

One of the more common responses a Lincoln impersonator gets from a passing pedestrian or audience member, we’re told, is a humorous offering of theater tickets. But in one almost painful moment in the film, a Lincoln presenter is interrogated on his feelings (as Lincoln) toward the country’s direction right now, in this moment, from a woman in a crowd. The presenter, Lonn Pressnall, avoids the question by responding that Lincoln is not properly informed of the current political climate. It’s a swift dodge.

“It happens a lot, which was surprising to me,” Grogan says of those kinds of interactions with audience members. “For one, I was surprised that people would be so invested in Lincoln that they would want an impersonator to say what they want to hear.” (Tom Lynch)