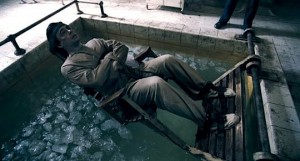 Like the sepia-jaundiced monochrome of the dusty “The Book of Eli,” the gloomy blue-gray palette of the dank “The Wolfman” surrounds us in an unmistakable and inescapable place. Mise-en-scène, of course, is more than color, decor, costume, howls and yak-hair extensions. There is how characters make sense of this sunless land of leafless branches and ominous full moons. Writers Andrew Kevin Walker (“Se7en”) and David Self (“The Haunting”) “update” Curt Siodmak’s 1941 screenplay for “The Wolf Man” by wreathing this werewolf classic with a welter of threads and tangents. Benicio Del Toro plays Lawrence Talbot, a Shakespearean thespian raised in America after a stint in an asylum.  His brother’s fiancée Gwen Conliffe (Emily Blunt) beckons him to his birthplace of Blackmoor. His missing brother Ben is found in a local country ditch ripped to shreds. Their father is Sir John Talbot (Anthony Hopkins). The unkempt estate of this nobleman bespeaks inner diseases of soul, tooth and claw. Hunting trophies abound. Nearby is a sepulcher to his late wife, slain years ago in the same manner as her son Ben. Director Joe Johnston (“The Rocketeer,” “Honey, I Shrunk the Kids”) handles the gothic saga with refreshing seriousness, with a trace of “X-Files” circa 1891. The syllabus of “The Wolfman” includes: class friction, gypsy lynching, animal rights and British colonial blowback via blood-borne curses. Sir John is partial to a prodigal-son reading of his long-gone Lawrence’s fateful homecoming. More to the point is the funny Freudian episode in a London medical amphitheater in a disastrous test of a diagnosis of a repressed primal scene. Gwen weighs the ontology of monsters, as if siding with the existential Ivan Karamazov in Dostoevsky’s 1879 novel: “If such things exist, if they are possible, then everything is: magic, God…” In another apt borrowing, composer Danny Elfman channels a key motif from Wojciech Kilar’s 1992 score for “Bram Stoker’s Dracula.” With Hugo Weaving, Art Malik, Geraldine Chaplin. 103m. (Bill Stamets)