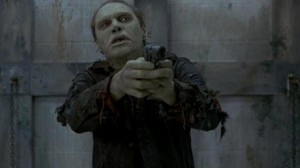 Vampires will come and go, but zombies have staying power. As part of the Facets Night School, Facets Cinematheque will show George Romero’s classic “Day of the Dead” at midnight this Saturday, February 20. Facets’ Patrick Ogle, who will lead a pre-screening lecture, says, “George Romero created the ‘movie zombie’ as we know it in ‘Night of the Living Dead.’ Before that—and there are some exceptions to what I am about to say—zombies were ‘voodoo zombies’ or an adaptation of ‘voodoo zombies.’” “Day of the Dead” is the third installment in Romero’s “Dead” trilogy, and as Ogle puts it, “Is the poor stepchild amongst the first three Romero zombie films. It is the grimiest of the movies.” Tickets for the night’s event are five dollars, and include an educational packet with notes, essays and a bibliography for further reading. There will also be raffles for movies, posters and books. And if the movie and discussion isn’t enough for your undead palate, Ogle jokes, “I usually kill an audience member and eat their brains.” (Peter Cavanaugh)