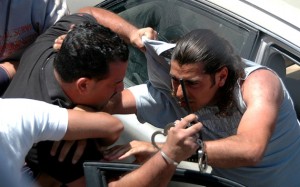 Writer-directors Scandar Copti and Yaron Shani’s Arab-Israel “Ajami,” Israel’s submission for Best Foreign Language Academy Award, is a tense, observant, brutish set of stories unfolding in the rough Ajami ghetto neighborhood of Jaffa, where Jews, Muslims and Christians fail to hold an uneasy truce, even among their own factions and families. Call it “City of Gods.” Copti is Palestinian; Shani is Israeli. A key to the film’s urgent intimacy is that it was shot on location with a largely non-professional cast. A drive-by shooting of a teenager inflames the area. Mistaken identity is key to “Ajami”‘s narrative tactics, in which bits of story overlap and timelines are fractured, less in the manner of “Pulp Fiction” than as if the strands of “Crash” were refracted through one’s own first perceptions of a scene. The key incident working with this strategy peels away slowly, and is infuriating at first, the trick played on the viewer, but on reflection, it’s a powerfully illuminating perception of misperception: in moments of heightened conflict, heart beating, anger rising, what does it take to think clearly, to see all sides, to avoid anger, hatred, the impulse to violence, the firing of a gun? (The obligatory Romeo and Juliet story is key as well.) Boaz Yehonatan Yacov’s cinematography, working with HD in low, grimy light, has a bruising economy and elegance. With Fouad Habash, Nisrine Rihan, Elias Saba, Youssef Sahwani, Abu George Shibli, Ibrahim Frege, Copti, Shahir Kabaha, Hilal Kabob, Ranin Karim. 120m. (Ray Pride)