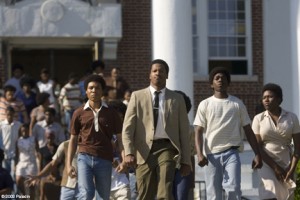 Oxford, North Carolina, is the settling of the inspirational “Blood Done Sign My Name,” the story of the trial and aftermath that results from the 1970s killing of a black Vietnam veteran by a white family who are acquitted by an all-white jury. As written and directed by the Arkansas-born Jeb Stuart (co-writer of “Die Hard” and “The Fugitive”), based on Tim Tyson’s book, the post-Jim Crow tinderbox is depicted straightforwardly, without elevating the story to “To Kill a Mockingbird” myth-making or wholly reducing the conflict to television-movie level cardboard. The performances are erratic, suggesting a rushed production. Stuart is a 1978 alum of the University of North Carolina at Chapel Hill, which surely reinforces the fine location work with an eye for small towns of that region and era. “Blood” is the debut production of North Carolina native Robert K. Steel, a former vice-chairman of Goldman Sachs.With Michael Rooker, Rick Schroder, Omar Benson Miller, Afemo Omilami, Lee Norris, Lela Rochon, Rhoda Griffis, Nick Searcy, Gattlin Griffith, Nate Parker, Darrin Dewitt Henson. 128m. (Ray Pride)