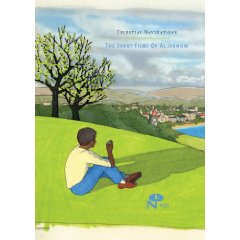 “Avant-Gondry,” the Siskel capsule for “Celestial Navigations: The Short Films of Al Jarnow” begins, and it’s a good start for this heartening selection of seventeen animations by Al Jarnow, mostly from 16mm originals, whose work ranges from pieces for children’s television and personal, more “avant-garde” work. Jarnow’s 1984 time-lapse film “Celestial Navigation” is an enthralling experience: measuring the light that falls in an upstairs room, ideal and bright for an artist’s studio. But it’s also eye-widening to realize that Jarnow animated for “Sesame Street”: films like these, drawing on a wide range of animation and experimental traditions, were part of the currency of education not so long ago. They snuck, unannounced, into cultural consciousness (and unconsciousness, as several are uncannily familiar to anyone who would have seen them as but a child). “Cosmic Clock,” a hand-wash lovely, defines seconds and minutes then centuries and millennia as a young man with a stopwatch, lying at a lean on a hill overlooking a lake, considers eons as Jarnow’s gentle animation pencils away. A hypnogogic time capsule to savor. A half-hour documentary, “Asymmetric Cycles,” will be shown, too, following Jarnow’s creative process. 90m. DigiBeta. (Ray Pride)

“Celestial Navigations” shows Friday and Saturday at Siskel. The Numero Group releases a DVD in coming weeks that has a total of forty-five pieces, along with the documentary.