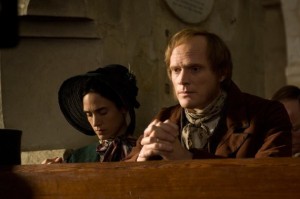 Jon Amiel is fondly recalled by veteran cinephiles for the original BBC miniseries of Dennis Potter’s “The Singing Detective” (1986) and the verdant fairytale “Queen of Hearts” (1988). After that, he established a reputation as a genial hack or “jobbing director,” as his countrymen might call him: in at least one notable case, another director publicly alleged a studio film he’s made was reshot by Amiel to ill result. As well, Amiel’s later work includes a science-fiction fizzle, “The Core” (2003), wherein scientists seek “Unobtanium,” centuries before “Avatar” explained how essential that fictive mineral is, the muddled caper “Entrapment” (1999) and a serial-killer effort, “Copycat” (2005). His latest, “Creation” (2009), makes a further confounding entry on his CV. Wading through this genteel slush, Paul Bettany struggles manfully as Charles Darwin, himself struggling to finish his “On the Origin of Species,” published 1859, with the help of fearful, doctrinaire Unitarian wife, Emma, played by Jennifer Connelly, Bettany’s mate in real life. The well-stuffed production is diorama-worthy on Darwin’s flora-choked countryside retreat, but the quotient of drama is drear, the pace enervated. Is genius so dull? Uncinematic? Undramatizable? Unfathomable. Dunno, there’s a lot of “un” in this theoretical entertainment. It took God seven days before he could rest, but “Creation” could put him to sleep in half its running time. Controversy among internet pamphleteers who take umbrage at any invocation of science is hardly likely. With a somnambulant Jeremy Northam, a jagged Toby Jones, Jim Carter, Bill Patterson and the eminently monikered Benedict Cumberbatch. Nice orangutan, though. 108m. (Ray Pride)