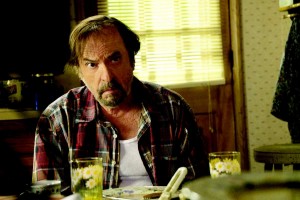 Through no fault of its own, Pittsburgh is looking like the go-to setting for those dysfunctional family indies of the variety that premiere in Park City every January. In “Happy Tears” writer-director Mitchell Lichtenstein–opting for less bite than his Sundance debut “Teeth” (2007)–offers two grown sisters with issues going home to take care of business when less-than-dear old dad starts to slip into dementia. Tamara Jenkins did this far better in “The Savages” (2007) with Laura Linney and Philip Seymour Hoffman as the sibs. Lichtenstein casts Parker Posey in her Sundance-branded straitjacket as another neurotic wealthy ditz dressed in chic black and twitchy with sexual complications. This time she plays Jayne, a childless chronic shopper married to Jackson (Christian Camargo), the son of a late American painter. (Lichtenstein, son of the late American painter Roy Lichtenstein, shares in his press notes: “No, the character of Jackson is not based on myself, though there are a couple of similarities.”) Jayne’s more grounded sister Laura (Demi Moore) is married with kids. Dealing with their dad Joe (Rip Torn) and his crackhead companion Shelly (Ellen Barkin) brings up stuff from the past. Like their late mother’s opal pendant and other items unearthed in the backyard using heavy equipment. That’s a blunt metaphor for other stuff buried in the family’s memory. Lichtenstein consoles by unblocking family impasses. Treasure and insemination ensue. There’s less legible closure, though, for the 1968 canvas by Roy that Mitch uses as his title: that “Happy Tears” sparked an investigation by the South Korean government after Samsung’s chairman bought it at Christie’s. With Billy Magnussen, Roger Rees, Sebastian Roché,  Susan Blommaert. 96m. (Bill Stamets)