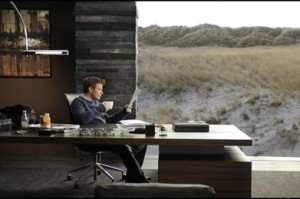 Like a finely drawn sketch, the silky, serenely sinister “The Ghost Writer” implies as much as it illustrates.

Drawn from Robert Harris’ efficient 2007 bestseller, “The Ghost,” that riffs on the “special relationship” that the government of former British Prime Minister Tony Blair had with the United States, the project was taken up by Roman Polanski and Harris after financing for their $100-million adaptation of Harris’ “Pompeii” fell apart. The film’s dialogue is drawn largely from the book, but with a more precise wit and chilly twists to the talk.

After a $10 million deal for his memoirs, former P.M. Adam Lang (Pierce Brosnan) has been installed at his publisher’s Martha’s Vineyard retreat. After the drowning death, a possible suicide, of Lang’s longtime aide who was compiling the book, a second ghost is required. Ewan McGregor plays the title figure (never named), an efficient hack best known for “I Came, I Sawed, I Conquered,” ghosted for a celebrity magician. The acting amuses: Brosnan’s emulation of a politician’s alternately open and reserved body language, of public face and private face, is keen; McGregor’s puppyishness serves him well as he scratches for clues to a mystery he didn’t expect to roll around in; and as Lang’s wife and political partner, Ruth, Olivia William’s lovely, grave eyes suit her character, with a performance that shifts from moment to moment from watchful languor to residual disdain. Smaller roles include Kim Catrall as Lang’s close-as-this chief of staff; Jim Belushi’s brusque, bullet-domed publisher and, as a now-shadowy academic Lang knew in college, Tom Wilkinson is a marvel of sly condescension that masks brackish contempt.

Events move at a page-turner’s pace as the Ghost is caught up in Lang’s affairs, but despite the eruptions of accusations of war crimes (a reference to waterboarding suits a tale that opens with a drowning) and conflicts international and intimately domestic, Polanski’s tone is serene yet insubordinate, drawing out the hush and simmer of transactions that transpire like distant whispers.

“The Ghost” is the better title: McGregor’s unnamed ghost works within a welter of palimpsests, starting with taking over as ghost from a dead ghost. He discards the dead man’s shoes, calls phone numbers found on archive photographs of students no longer young, is betrayed by caller I.D., and finds his most serious clue from following the programming of an obstinate, talking GPS device. And of course, a memoir is writing atop a life.

“The Ghost Writer” is a brooding marvel of weather: off-season Martha’s Vineyard (shot in Germany), is gusty and gray, and the publisher’s low, flat compound, from outside not unlike a jail or barracks, has broad expanses of glass that open onto increasingly stormy skies that begin as hard horizontals of pale white and slate, and move to gray and grayer. (Cinematographer Pawel Edelman also shot “The Pianist.”) Despite the multimillion-dollar view, the design of the house is oppressive, more a work of art than a home, a fortress for the embattled politico, a jail for his new scribe. A recurrent image: a groundskeeper rakes up leaves and twigs and the wind teases them out again. There’s a tussle of debris in the wind, backscatter, like the fuss that’s about to erupt in the political world as Lang is accused by former colleagues of authorizing crimes. Those versed in British politics of the past few years will recognize parallels to the fictional conspiracies on-screen, and Lang has a Bush-like metabolism with a hunger for anaerobic strain. (Brosnan’s sweaty t-shirts become an emblem as well.) There is other cheekiness: where on earth would you come up with a company named “Hatherton”? Blend Halliburton with the Carlyle Group, stir.

Postproduction for “The Ghost Writer” was completed after Polanski’s Swiss detainment, but its portrait of isolation against the judgement of a larger world is not only prescient, but weirdly knowing. Personal work, indeed: “This is about justice” is one of many lines that resound as crowds clamor against Lang’s perfidies and crimes. Only a little was left to do, like the nicely Bernard Hermann-ish score by the prolific Alexandre Desplat (“The Fantastic Mr. Fox,” “Benjamin Button,” “New Moon,” “A Prophet”). Technically, the only jarring moments are three instances where the word “fuck” has been visibly replaced to get a PG-13 rating and a well-placed Brit c-word from the book and script is replaced with a culturally non-specific “Asshole!”

Polanski frames and cuts as with a scalpel: most of the settings and framings could be called “hygienic.” The result is nippy, not icy, not cold: so much saline wit rises from the ashes of he and Harris’ sundered “Pompeii.” Polanski knows how to finish a film: after a virtuoso pair of shots, one involving a passed note at a public gathering that suggests the chain of complicity among not only the story’s players, but politics and society at large, the other a corkscrew closeup, the film crests. The sound design anticipates the ending, it blooms just perceptibly, volume rising, as you realize what has happened. The impact is coolly sardonic. It’s the depth of nightmare: a fear congealed, turned crystalline, lingering like a pen-knife to the heart. It shares the sense of rhythm, repetition and framing, as well as civic space and intrinsic political corruption that makes the last curdling moments of “Chinatown” so timeless and unforgettable.

A trifle, some reviewers have written, dismissing the exemplary embroidering of the novel’s spinner-rack satisfactions, but the filmmaking is jade and carborundum, flint, blade, spark, wink. Craft obtains. “The Ghost Writer” shimmers before it fades.