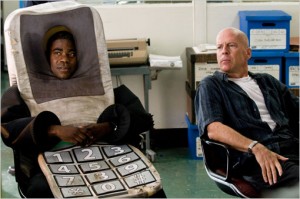 Kevin Smith directs and edits a screenplay by Robb Cullen and Mark Cullen, who show their knack for comedy in this line from their press notes: “Robb is a high-functioning moron with no formal education or training.” If it’s not funny, that’s his excuse in a news cycle when “retards” so interest pundits, gag writers and identity activists. “Cop Out” scores a sort of parity by proving incompetent in all departments except maybe craft services and set security. This cop buddy comedy is set in Brooklyn and Queens where lots of Mexicans with tattoos get shot. On their ninth anniversary on the force, detectives Jimmy (Bruce Willis) and Paul (Tracy Morgan) get thirty-day suspensions without pay. That dashes Jimmy’s plans to cover the $48,020 cost of his daughter’s wedding. But wait, maybe parting with his prized 1952 Andy Pafko baseball card will save face for Jimmy since the last one up for auction brought $83,000. If only two ninja-garbed thieves with Tasers didn’t stick up the sports collectible shop just after Jimmy walked in. Which leads to a stolen Benz whose trunk hides a woman from Mexico wearing a crucifix necklace that hides a flash drive with drug cabal data. Like most cop buddies on the screen, Jimmy and Paul go through the usual humiliation issues with their off-duty ex’s and spouses. Their on-duty routine is a very limited overplayed joke about their “homage” to lines of dialogue from other cop films.  With Seann William Scott, Rashida Jones Adam Brody, Kevin Pollak, Guillermo Diaz, Ana de la Reguera, Michelle Trachtenberg. 110m. (Bill Stamets)