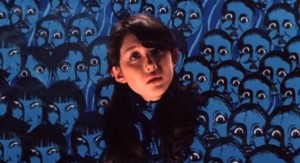 (Hausu, 1977) “House” is so much stranger than “The Room.” “The Room” may be from another planet, but Nobuhiko Obayashi’s hallucinatory House” is from another universe, or, it’s like “an episode of Scooby Doo as directed by Dario Argento” as distributor Janus Films inventively suggests. Attempting to capture the fanciful imagination of his 11-year-old daughter, Obayashi’s pop-art haunted-house freak-out featuring seven teenage girls manages to be both compulsively watchable and completely indigestible. It’s a buffet of strangeness, grape bubblegum meets sashimi meets Sid and Marty Krofft’s “Banana Splits.” The detached fingertips picking out tunes on a very hungry piano are one of the inspired nightmare images you’ll be repeating for weeks. Disembodied kung fu-kicking girl’s legs? The bursts of animation, including a demonic cat (seen on the stunningly bold poster) and tragically sweet pop are equally random. It’s glorious delirium and downright nuts. 110m. (Ray Pride)

“House” opens Friday at Siskel. The trailer is below.