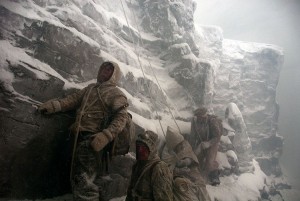 How this alpine period drama ends is unlikely to be telegraphed by the opening title: “Based on a true story.” For U.S. viewers–do you use a carbiner as a key ring? “North Face” is likely their first chance to learn how Nazis propagandized the first ascent of the North Face of the Eiger. Writer-director Philipp Stölzl opens with a close-up of hands turning the pages of a climber’s notebook of maps and snapshots. So we know someone survived the eventful feat to come. Three childhood pals who climbed together meet again at the base of the Eiger in July 1938. Toni (Benno Fürmann) and Andi (Florian Lukas) bicycled 700 kilometers from the barracks where they were doing their militry service with no distinction. Luise (Johanna Wokalek) went off to Berlin to work on a newspaper, where she fetches coffee. After hours she prints her photos in the darkroom. Her employer Henry (Ulrich Tukur) exploits her alpine expertise and her friendship with Toni and Andi to cover the unofficial competition between German, Austrian, Italian and French teams of climbers. The romantic undercurrent between Luise and Toni is downplayed until it triggers a perilous last-reel rescue with high winds and short ropes. Less subtle are the testy repartee between good Germans and bad at the posh Swiss resort serving the press and well-healed tourists. Just as didactic is Stölzl’s cultural shorthand to signal anti-Nazi values in the closing scene where skyscrapers replace mountain peaks. Among the grace notes in this worthy adventure is the piton-hammering percussion that Christian Kolonovits works into his rugged music. With Georg Friedrich, Simon Schwarz, Erwin Steinhauer, Petra Morzé. 121m. (Bill Stamets)