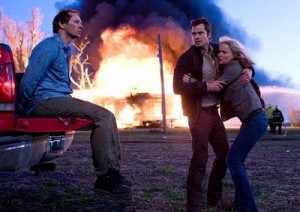 Iowans react to an outbreak of a virus that not only elevates their body temperature, but makes them kill neighbors and loved ones, although not livestock. First-person shooter thrills go exponential in a spree of Iowan-on-Iowan mayhem. The infected versus the disinfectors. “Initiate Containment Protocol” reads a directive annotating a satellite image of Pierce County. Extreme hygiene ensues. Breck Eisner (son of former Paramount and Disney exec Michael) directs a screenplay by two updaters of horror films: Scott Kosar did the 2005 version of the 1979 “The Amityville Horror” and 2003’s remake of 1974’s “The Texas Chainsaw Massacre”; and Ray Wright rescripted the 2001 “Kairo” into the 2006 “Pulse.” “The Crazies” revisits the 1973 original by George Romero, credited here as an executive producer. Horror shocks are added and political satire is subtracted. Sheriff David Dutton (Timothy Olyphant) and town doctor Judy (Radha Mitchell) are upgraded from volunteer fireman and nurse, respectively. Songwise, “Heaven Help Us” is replaced by a Johnny Cash cover of “We’ll Meet Again,” perhaps a nod to “Dr. Strangelove or: How I Learned to Stop Worrying and Love the Bomb.” (“When Johnny Comes Marching Home” is heard in all three films.) Eisner sounds savvy when calling our Midwestern wasteland “endless plateaus of nothingness” but this USC grad is silly to label his work “extremely thoughtful.” From the director of the fun, issue-free “Sahara,” that may be a stretch. This otherwise satisfying genre exercise blows off opportunities to contemporize Romero’s pointed references to Vietnam with new ones to Iraq and Afghanistan. That self-immolating priest in 1973 has no counterpart in the shoe-bomber of 2001 or the underwear-bomber of 2009? Eisner reportedly fact-checked the etiology of his crazed characters who look and act like they could have rabies, tetanus and erythema multiforme. What really ails them and their victims is a viral fear that entered our vital national fluids after 9/11. With Danielle Panabaker, Joe Anderson, Christie Lynn Smith, John Aylward, Glenn Morshower. 101m. (Bill Stamets)