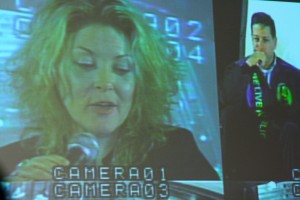 Monday night, Cobra Lounge is ground zero for a six-city experiment, launching the DVD and video-on-demand of the Sundance award-winning documentary, “We Live in Public.” Now situated in Chicago, the so-called “Warhol of Internet TV,” Josh Harris, accompanied by director Ondi Timoner, will take questions before and after a showing of the film.

On a large screen over the bar, a quadrant of feeds from Los Angeles, New York, Denver, Vancouver and Atlanta alternate with images from the Cobra’s own surveillance cameras inside and outside the building. The phone booth has its own flat-screens and cameras. Harris’ ideas were early: he got millions from investors for Internet TV years before broadband made it feasible. Bored, Harris built a bunker in downtown New York, dubbed “Quiet,” where a hundred or so people lived, ate, frolicked and fired off handguns and automatic weapons for free. The only condition? Cameras captured everything and Harris owned the images.

Timoner was around then but realized the value of the footage only when she saw her first Facebook update, she says. The experiment was a premonition of the impulse behind the data freely given to Facebook and Google every day. As an experiment in social power and domination, “We Live In Public” captures its cruel, controlling extremes. But it also shows the willingness of its subjects to forfeit elements of their real-life individuality for an online identity. The police came on the New Years’ Eve as 1999 was turning into 2000 and “Quiet” went silent. 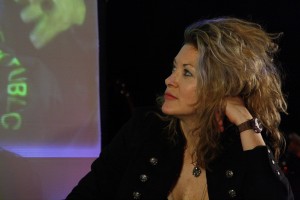 “One day we’re gonna wake up and realize we’re all servants” is but one salient observation. Timoner, a tall, striking woman with ascendant hair, enters with Harris, who looks like an ordinary middle-aged entrepreneur with an ever-present cigar. Timoner looks like a movie director. At Cobra, a half-dozen technicians and about a hundred viewers (just like “Quiet”) watch and listen, while Adrien Grenier hosts in New York and Eliza Dushku in Los Angeles.

Afterwards, it’s technical chaos and questions about Chatroulette and other contemporary manifestations are lost in echo, feedback, backscatter, images without sound. Whether or not the Internet was ever the Wild West, it’s also an intricate series of electronic transactions that can malfunction to comical result. In the room, there’s an intimate conversation, but what the other audiences heard, who knows? After almost an hour of failing to tether city to city, Timoner offers up DVDs for sale, the first time they’ve been in her hands, she says, and the mikes are cut. The DJ turns up music, it’s too good, it’s Mission of Burma: “That’s when I reach for my revolver; that’s when it all gets blown away.” (Ray Pride)