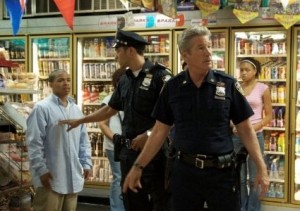 Three cops on different beats in Brooklyn will end up at one housing project. Narcotics officer Sal Procida (Ethan Hawke, “Training Day”) is the over-extended dad of Vito, Vinnie and Vicki, with twins on the way. To buy a bigger house, he robs dealers. “I don’t want God’s forgiveness—I want his fucking help,” he rails at his priest at confession. Clarence “Tango” Butler (Don Cheadle) is an undercover narc desperate for an overdue desk job but leveraged to sell out his tattered ethics. Eddie Dugan (Richard Gere) is a week away from a pension he may never collect if he keeps putting his service revolver in his mouth. Shooting at the Van Dyke projects in the Brownsville part of Brooklyn, Antoine Fuqua (“Training Day”) ably directs a lengthy well-built script by first-timer Michael C. Martin. “Brooklyn’s Finest” does solid work as a study of occupational risks. The workplace is a daily violation for Sal, Jake and Eddie. And each character breaks ranks. Cops can self-corrupt in more ways than one. Hell is a two-way mean street in the 65th Precinct. “In the lexicon of cop movies, it feels epic,” states producer Basil Iwanyk in the press notes.“This feels like Lumet or Scorsese.” Gere drops other names: “We were thinking of Othello and Richard III.” With Wesley Snipes, Will Patton, Shannon Kane, Brian F. O’Byrne, Lili Taylor, Ellen Barkin and Vincent D’Onofrio. 140m. (Bill Stamets)