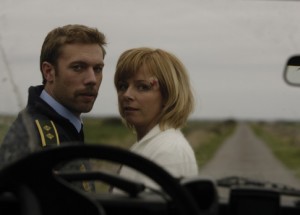 (Frygtelig lykkelig) Two childhood pals tell a nasty tale set in a Danish village near a bog with many uses. Director Henrik Ruben Genz and novelist Erling Jepsen grew up in Gram, and shot their first collaboration nearby. Three characters are based on people they knew in Gram who share their names on screen: a wife-beating drunk; his seductive, bruised spouse; and their little daughter, whose paternity is a matter of whispers. This screwed-up family makes work and life really messy for the new marshal. Sent from Copenhagen, Robert (Jakob Cedergren) misses his daughter but not his wife. His troubled past got him this posting—the last marshal’s stint seemed oddly short-lived—and he will get into more trouble. The stranger with a badge is constantly told how things are done around these parts: from saying both “hello” and “goodbye” with the same word, to hanging his towels on his clothesline. “Terribly Happy” opens with a legend about a cow that sank in the bog, only to surface a half year later and give birth to a freak calf with a cow head and a woman’s head. An outbreak of insanity struck livestock and locals. Menfolk dispatched the creature to the municipal bog: “Since then, there hasn’t been any fuss with neither cattle nor women.” Fuss-control is what locals do best. No badges needed, but three cardplayers need to fill a vacant seat at their table. This dour noir deals bitter comic pokes. Rural surreal bits include a cat with a meow sounding just like a peculiar local phrase. With Lene Maria Christensen, Kim Bodnia, Lars Brygmann, Anders Hove, ens Jørn Spottag. 102m. (Bill Stamets)