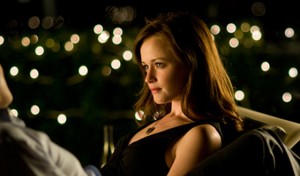 Julio DePietro sought fortune in the financial markets to escape an Ivy League student-loan load. Having found it here in Chicago with The Citadel Group, where he was an early player in what became one of the world’s largest hedge funds, he left to get into film. But unlike other moneyed movie makers who simply produce, he literally sent himself back to school for a crash course in directing. With his debut as writer-director, “The Good Guy,” set amidst the world of the young masters of the universe who trade millions and billions in the blink of a day, DiePietro crafts an accomplished romantic drama with a knowing eye for the nuances of Wall Street, thriving in its most cocky state before the recent humblings of financial crisis. Tommy (Scott Porter, television’s “Friday Night Lights”), the rising star at the firm, has a super-sweet girlfriend Beth (Alexis Bledel of “Gilmore Girls” fame) and a compelling earnestness; he seems like a good guy. He takes on the clumsy office gopher, Daniel (Bryan Greenberg, “One Tree Hill”), as a Pygmalion project, and a fondness soon develops between the project and his could-be paramour, Beth. But the romcom conventions that seem to be fully engaged soon give way to more complex literary devices, as Beth’s book group thoughfully outlines it for us—they’re reading Ford Madox Ford’s “The Good Soldier,” and that work resonates in more ways than one. The story curves in some big and nicely small ways, carried along by an able young cast seasoned beyond its age by an abundance of youth-acting experience (a list that even includes Brat Packer Andrew McCarthy and Anna Chlumsky, Macaulay Culkin’s first kisser in “My Girl,” in what seems to be a carefully considered obsession by the filmmaker). Unlike the cartoonish characterizations of Wall Street players in most pictures as overwrought  yuppie neandrathals, “The Good Guy” captures the high-octane boys club spot on: really smart, charismatic guys unenecumbered by “adult” supervision, making fortunes and drunk on their own self-worth Kool-Aid.

Early in the film, a block trade between two mutual funds of five million shares of MSFT (Microsoft) is put together. The film captures the adrenaline, the gamesmanship, the bravado and the speed at which a nine-figure transaction is done. Not with a contract, not even with a handshake, but with a phone call. The word, the word of this kid, is bond enough. It’s little wonder that such doings so fully intoxicate. Later, we discover that one character literally lives on a newly residential Wall Street. It is his entire world; he neither seeks nor is offered salvation. As bleak as DePietro’s knowing survey of his former life, he’s insightful enough to see the grays hiding between the neon extremes, as embodied in the character in the firm—a bit role in the picture—who’d married young and stayed that way, never succumbing to the zest for sexual conquest that seasons the air. His younger cohorts, mocking all his missed opportunities, can’t help but sense, even respect, his contentment. It’s a small note, a bit of hope for a hopeless world, and a portent for this rookie filmmaker. (Brian Hieggelke)