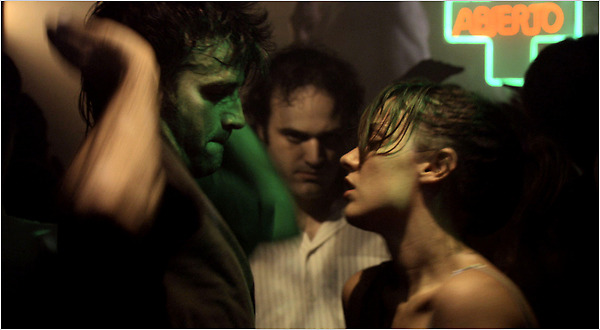 Argentine director Gabriel Medina’s “The Paranoids” (Los paranoicos, 2008) has sidelong graces more successful than a storyline with its romantic-comedy trappings, notably a pervasive mood of uneasiness and urban discontent. Luciano (Daniel Hendler in a sly, ticklish performance) is a paranoid thirtysomething surviving as an awkward performer at children’s birthday parties dressed as a purple furball from a local TV show; the discovery that he’s attracted to Sofia (Jazmin Stuart), his friend Manuel’s  (Walter Jakob) girlfriend comes around the time he discovers that his every fumble is translated by Manuel into the stuff of a Spanish telenovela about a complete loser. Many of the turns of the tale are gratifyingly witty. There are echoes of Daniel Burman’s neurotic comedies like “Family Law” (2006) and “Lost Embrace” (2004) and not only because Hendler has been his alter ego in them, but because of a pervasively glum mood in the striking Buenos Aires locations. The casting of characteristic Porteño faces and spaces is another satisfaction. The city’s bright and grubby glories come out to play. Lucio Bonelli’s cinematography in both interiors and location exteriors has a bruised beauty and uneasy intimacy that elevates “The Paranoids” into a lingering dream state. There are elements that will range from winsome to wince-worthy, depending on your temperament; it’s the second feature in as many weeks at Facets where confused youth don fuzzy animal headgear. Youth culture and its ragged boundaries were never meant to please everyone. 101m. 35mm. (Ray Pride)

“The Paranoids” opens Friday at Facets.