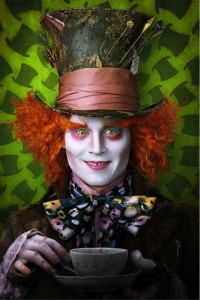 Tim Burton confects a lesser landscape of adolescent angst. His fans and Lewis Carroll’s may find this “fantasy adventure” with “political allegory” and “avant-garde visuals” in Disney Digital 3D not their tea or party of choice. Screenwriter Linda Woolverton’s adaptation of “Alice’s Adventures in Wonderland” (1865) and “Through the Looking-Glass” (1871) stars Mia Wasikowska. This 19-year-old Alice flees a garden party, tumbles down a rabbit hole, imbibes elixirs, converses with animals and consorts with scheming queens. A parchment scroll foretells she will behead a dreaded resident of Underland. Wasikowska here recalls Dakota Blue Richards playing the 12-year-old adventurer in “The Golden Compass” astride a fantastic galloping beast, and the 14-year-old sojourner played by Saoirse Ronan in “The Lovely Bones,” for whom a subterranean playroom was the portal to another dreamy realm. A charter member of a clique of the mad, the open-minded Alice entertains advanced ideas about propriety, arranged engagements and mercantile expansion in China. On the centenary of Carroll’s birth, G.K. Chesterton lamented: “Poor, poor little Alice! She has not only been caught and made to do lessons; she has been forced to inflict lessons on others.” The Alice of our time is assigned duty as a role model for girls nudged to think about finance rather than fiancees. There ought to be more wordplay, like Alice’s disquisition on the use of the word “secret” that anticipates the ordinary-language school of philosophy at Carroll’s Oxford. Burton fails to make her plight nearly strange enough. Her odd new world is insubstantial and its inhabitants are uninteresting. Johnny Depp’s Mad Hatter is a major letdown, compared to inspired loons he’s played in “Pirates of the Caribbean,” “Charlie and the Chocolate Factory” and “Sweeney Todd.” Helena Bonham Carter, though, is superb with her digitally-ballooned noggin as the Red Queen. With Crispin Glover, Matt Lucas and Tim Pigott-Smith in the flesh; and in voice only Alan Rickman, Stephen Fry, Timothy Spall, Christopher Lee and Barbara Windsor. 109m. (Bill Stamets)