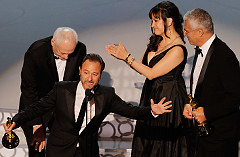 A fey young man storms across Cleo’s to the back room and taps a tall woman on the shoulder. “Kate Winslet called. She wants her face back,” he says before sashaying over to another woman, delivering more bizarrely aggressive compliments as he mingles. The booths are filled with groups of friends dishing amiable celebrity gossip and sipping beer, eyes glancing up at one of the many televisions as this year’s Oscars begin. The ubiquitous sight of heads bent over cellphones indicates the tweeting has also started. It continues all night.

Clooney is universally loved, even if he looks cagey every time the camera pans to his face. The guy from “Short Circuit” elicits multiple cries of “Johnny Five!” when he wins an Oscar for “The Cove.” Nobody has thought of that guy in years. Molly Ringwald, looking terrified in a grape-colored toga and questionable jewelry, inspires one gentleman to mutter, “Pretty in pink, not so much purple,” while passing around a tray of cupcakes. It’s a friendly, low-key affair, though fiery debates erupt over nominees.

“Avatar” or “Precious”?  Mo’Nique or those babes from “Up in the Air”?  “The Hurt Locker” seems unanimously held in high regard, but a lone pregnant woman lobbies hard for “Inglourious Basterds.” She goes quiet when the horror tribute, a highlight, begins to roll.

Later, over farewells and promises of movie dates, the consensus is that the hosts were lame, the dance troupe was weird. Earnestly, the discussion turns… where the hell was Brangelina? Quick, check Twitter. (Jessica Meyer)