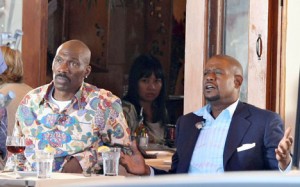 Ethnic spice is lite in this cross-cultural comedy of marriage manners. A Columbia med-school grad and a Columbia law-school dropout come home to Los Angeles en route to Laos for a year with Doctors Without Borders. Marcus (Lance Gross) and Lucia (America Ferrera) have three weeks to meet each other’s family and marry. It’s hard enough to let her parents see Marcus is black, but it’s even harder for Lucia to admit she quit her studies and started volunteering at a charter school. Their two dads (Forest Whitaker and Carlos Mencia, respectively) engage in numbskull head-butting over who sits down first, who picks up the tab and other lame mano-a-mano bits. Lucia’s old country grandma (Diana Maria Riva) faints at her first sight of Marcus. Later she tells Lucia how women manage men: “We never apologize. That’s how we dominate their brains.” Marcus must come out as pro-matrimony to his divorced play-the-field radio dj dad. Director Rick Famuyiwa (“The Wood,” “Brown Sugar”) co-wrote these awfully thin characters with Wayne Conley and Malcolm Spellman. At one point Lucia tearfully hands her engagement ring back to Marcus. Can you believe he later places a wedding ring on her finger? Believe it. “Our Wedding Family” says we all can get along. If this is the first L.A. ethnic-themed film with no Korean jokes, it’s also the first with inappropriate interspecies sexual contact initiated by a goat jacked on Viagra. With Regina King, Lupe Ontiveros, Anjelah N. Johnson. 101m. (Bill Stamets)