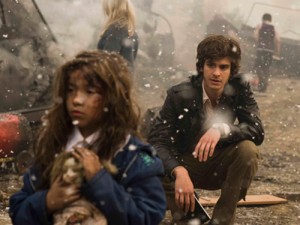 David Peace’s “Red Riding” books, drawing on the real-life “Yorkshire Ripper” cases, are a marvel of surrealism and despair, finding language both vernacular and incantatory to capture the failed attempts of investigators and journalists to solve brutal serial killings in Leeds, Yorkshire, across two decades. The quartet of novels is pared to a trilogy, rich, compelling noir movies that were produced for British television: “Red Riding: In the Year of Our Lord 1974” (directed by Julian Jarrold, “Kinky Boots,” shooting in Super 16; “Red Riding: In the Year of Our Lord 1980” (James Marsh, “Man on Wire,” shooting in 35mm widescreen); “In the Year of Our Lord 1983” (Anadd Tucker, “Shopgirl,” shooting with the Red One camera). The visual style in all three is as dark as the crimes on show, unafraid of the possibility of the perfume of pretension and the funk of sadism: think “Se3en” instead of “Se7en.” “1974” may be the most successful, following Eddie Dunford (Andrew Garfield, “Boy A”), a young reporter for the Yorkshire Post who’s returned after time spent “down South.” (The invocation of “The North”—”The North, we do what we want”—and its ways so often would be comical if not consistently menacing.) Referring to a recently disappeared peer, Peace’s novels open, “All we ever get is Lord fucking Lucan and wingless bloody crows,’ smiled Gilman, like this way the best day of our lives… Waiting for my first Front Page, the Byline Boy at last.” Young spunk meets cloacal immersion: confronting a local real estate entrepreneur John Dawson (Sean Bean) is the first instance of Eddie’s putting of many of a foot wrong. Prolific expert David Thomson has overreached in asserting these films as the equal of “The Godfather” and “The Godfather II,” but despite their gloom, violence and despair, they’re roundly thrilling: the parochial cruelty—do the police use the crimes as cover for avenging their own enemies?—is unrelenting and the depths of viciousness can hardly be guessed. Each director finds their own style, but the unity comes from screenwriter Tony Grisoni’s proficient distillation of the material and themes. In Marsh’s “1980,” Paddy Considine may give the series’ best performance as a police investigator running an internal affairs investigation of the 1974 events.) In the best possible way, “The Red Riding Trilogy” harks back to U. S. and British thrillers of the 1970s: deeply skeptical and bold in accepting that compromise and failure are an ineffable part of the human condition, or at the very least, of the genre of thrillers pitting authority against avarice. With Rebecca Hall, Peter Mullan and Eddie Marsan. 105m; 96m; 104m, respectively. (Ray Pride)

“The Red Riding Trilogy” opens Friday at the Music Box, with viewing options including a Roadshow-style marathon sit. The Channel 4 website has trailers and more.