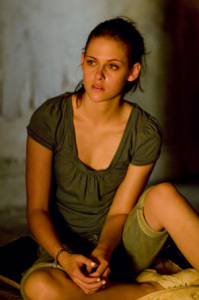 “The Yellow Handkerchief” is a captivating character study of unlikely provenance, capturing eminently watchable loners in ravishing landscapes. Here’s the pile-on behind the picture: The story began as a newspaper column from the 1970s by Pete Hamill, which was the basis for the Tony Orlando and Dawn song, “Tie A Yellow Ribbon ‘Round the Ole Oak Tree.” Producer Arthur Cohn is 83, the only winner of five Oscars in that role, including for “Four Days in September,” “The Garden of the Finzi-Continis,” “Black and White in Color” and “Harlan County.” The glorious cinematography is by one of the world’s best cameramen, Chris Menges (“Local Hero,” “The Mission,” “Notes on a Scandal”); the editing is by Christopher Tellefsen (“Gummo,” “Capote”). The director, Udayan Prasad, is best known for 1997’s “My Son The Fanatic.” “The Yellow Handkerchief,” the film, written by Erin Dignam, is set in post-Katrina Louisiana, with recently released ex-con Brett (a mustachioed William Hurt) winding up in the company of two unschooled teenagers in a convertible, 15-year-old Martine and Gordy (Kristen Stewart, Eddie Redmayne). Taciturn yet menacing, precise just shy of precious, Hurt’s performance is one of his richest. But Prasad’s handling of the slim, familiar story allows the characters space to interact, to breathe, and it’s a gratifying choice. He honors the serious and the sentimental alike. It makes for a lovely fable. The able score is by Eef Barzelay, of Clem Snide, and Jack Livesay (“Sherrybaby”). With Maria Bello. 96m. (Ray Pride)