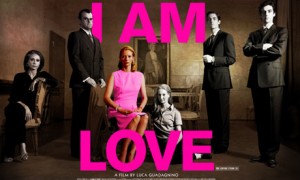 The highlights of the second week of the Siskel Film Center’s marvelous March EU Film Festival include “Let It Rain,” (Fri, Mon) the latest from the writing-acting-directing team of Agnes Jaoui and Jean-Pierre Bacri (whose credits include writing for Alain Resnais and the splendid “The Taste of Others” and “Look at Me”). It’s a comedic ensemble piece about a famous feminist writer who decides to run for office. Catherine Breillat’s latest bent-gender tale, “Bluebeard” (Sat, Thu) is another entry featured from France this week. Spain’s “Cell 211,” a prison drama that swept that country’s Goya Awards, plays Saturday and Thursday. The sweetly sweeping gem of the week, however, is from Italy, Luca Guadagnino’s “I Am Love,” (Io sono l’amore), with Tilda Swinton (acting in Italian) at the center of generational rumbles in a wealthy Milan family. Mad, fabulous melodrama ensues, accompanied by a fine, first score by composer John Adams. Guadagnino is an inspired director of all kinds of rhapsodic moments, and his passion extends to a feast of food imagery. (Ray Pride)