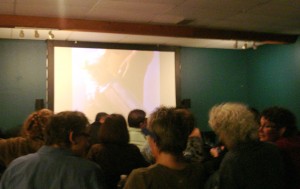 Walking up the stairs in the space owned by Chicago Filmmakers is not weird. Walking up those wooden stairs on the second Saturday of the month when a group with the name Dyke Delicious hosting a “Babes in B-Movies” night really isn’t even that weird. In fact, it’s downright inviting. On the second floor, amid posters of previous showings and a spread of chips, salsa and Girl Scout cookies, one of the Dyke Delicious leaders, Sharon Zurek, and a host of dedicated volunteers welcome each audience member. It’s like walking into one of those storied bars, only the regulars don’t glare, rather they are quick to embrace. The group started showing their films about seven years ago at Chicago’s annual Reeling Festival, but as Zurek says, “We didn’t want to wait a whole year to get together.” Now they show films every second Saturday of the month. “We usually try to make it fun and irreverent,” says Sharon. “Well, mostly irreverent.”

Tonight, ladies are grouping up around a table to make 3-D glasses. A few discuss beading and the difference between “craft” and “Craft.” The reel of black-and-white commercials featuring none other than Ronald Reagan stops, and Zurek tells everyone to try out their new glasses. A scene projects on the front screen with a few blurry faces.

“Can anybody see the 3-D?” Zurek asks. The crowd, mostly ladies peppered with a few guys, shout, “No!”

“Well, at least you now have glasses for ‘Avatar’,” Zurek says, smiling.

The movies tonight are edits of old B-movie classics—if such thing exists. Zurek has chopped up “Swamp Women,” “Cat-Women of the Moon” and “Girls on the Loose” to tighter narratives that focus more on the women and cut out most of the guys’ roles. The crowd whoops and laughs at implied gender differences, funny edits and the constant slapping between the women on the screen.

When the movies end, Zurek tells everyone there’s still beer and snacks left. She lets everyone know that there is no hurry to leave. Some women hang on the counter, sipping beers, discussing what they just saw. A few congregate outside. “I don’t know if it was my kind of movie,” says Jane, a regular. “But I see the regulars; I see the same people every screening.” And that seems to be just as important for the audience and Zurek alike. (Peter Cavanaugh)