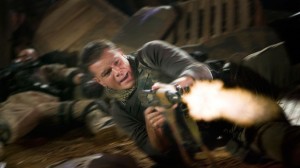 When would’ve been the right time for Paul Greengrass’ latest headlong movie, a heady venture into a foreign land, the Morocco-shot Iraq War fable “Green Zone,” which suggests one honest man, Chief Warrant Officer Roy Miller (played by a more-than-solid Matt Damon) could have unburied the truth about nonexistent WMDs, or weapons of mass destruction. A week shy of seven years since “shock and awe,” its opening weekend didn’t do so well, and its further commercial prospects are dire, but the director of the latter two “Bourne” films has done “too soon” already, and well, with “United 93.” Miller crosses lines of authority when faced with both a Paul Bremer-like bureaucrat (an oleaginous Greg Kinnear) and a Judith Miller-like journalist (Amy Ryan, working for the Wall Street Journal rather than transcribing for the New York Times; she’s vital with very little dialogue) who have their own running dogs in the game. Within minutes, or hours, in screen time, it’s “Bourne” in the fashion of 1970s conspiracy thrillers like “Three Days of the Condor,” “Green Zone” proves its metaphoric acumen by eliciting cries of “anti-American”! from august journalistic corners such as the New York Post. Working from a script credited to Brian Helgeland (“L.A. Confidential”), Greengrass captures the perspective of those on the ground, particularly Iraqis, in a way that maybe only the documentary “No End In Sight” has among American ventures into this subject matter, and the final shot is a blunt about why we’re there. Still, a little more skepticism would be in order, as in “Condor,” which ends with CIA retainer Robert Redford, having dropped information in the lap of the New York Times, is asked by his handler, Cliff Robertson, “What makes you think they’ll print it?” With Brendan Gleeson. 115m. Anamorphic 2.40 widescreen. (Ray Pride)