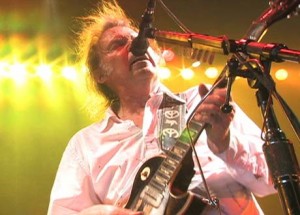 In a follow-up to “Neil Young: Heart of Gold,” Jonathan Demme shoots Young rocking two nights three years ago in Upper Darby, Pennsylvania. On this Chrome Dreams II tour, Young and his band had played two nights at the Chicago Theater the month before. Demme skips the interviews and backstage footage found in his 2006 concert documentary, shot over two nights in Nashville. Country and bluegrass artists don’t share Young’s stage in “Trunk Show,” nor are there the polished tracking shots DP Ellen Kuras crafted for “Heart of Gold.” Cinematographer Declan Quinn, along with Demme and five other shooters, wield digital camcorders for mostly handheld coverage. There’s some Super-8 and a few nine-screen grids, but this is more concert than film from the distributors of “The Singing Revolution,” “We Live in Public” and “Incident at Loch Ness.” Stage design is limited to remnants of an old-time theater marquee with random letters, a red telephone and a pirate flag fluttering by a fan. There is no giant microphone wrangled by hooded druid-like roadies with flashlights for eyes, as in the 1978 San Francisco concert Young turned into the film “Rust Never Sleeps.” In “Trunk Show” he performs an alternately rousing and reflective set, sometimes playing piano and banjo. The 64-year-old Canadian stomps on stage like a shaggy workhorse. Hunched over, he brandishes his electric guitar like a farm tool. His gruff-honey voice has the timbre of hardwood bark. His elderly bandmates come off as seasoned artisans, not burnout longhairs in denial, as one extended instrumental with his bassist and rhythm guitarist proves. 82m. (Bill Stamets)