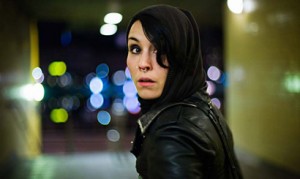 “The Men Who Hate Women” is the blunt original title of the late Swedish writer Stieg Larsson’s worldwide bestseller; its harsh portrait of that country’s industry and welfare state earns it. But can a story about misogyny inadvertently traffic in it? As “The Girl With The Dragon Tattoo,” it’s a barn-burner of a page-turner, the first of three novels Larsson left behind (films have been made of all three; the other two will be released this summer). The adaptation by director Niels Arden Oplev (“Portland”) is an adroit compression of its angry themes and doesn’t stint on the graphic material. (Its distributor is Chicago-based Music Box Films; see related story.) Financial journalist Mikael Blomkvist (Michael Nyqvis) has been convicted of libel and will be going to prison, which allows an aging industrialist from the fractious Vanger clan to hire him to investigate a forty-year-old mystery about a missing girl. Before he’s hired, Lisbeth Salander (Noomi Rapace), a young investigator with epic hacker skills, investigates him. Their paths cross, and soon they are in league together in an increasingly epic search for a serial killer. The two-and-a-half-hour running time never feels leisurely, although three scenes involving rape and retribution involving Salander and an advocate assigned to her by the state go well into NC-17-level cruelty. (It’s one of the key differences between page and screen, especially involving violence: you imagine only as much as you need to while reading.) While made for television, Oplev’s visual style, from design to lighting to framing, has cinematic sweep (and the men’s cardigan budget must have been daunting). While several plot strands are swept away, there are lingering glances and hints toward them which suggest the filmmakers thought most of their audience would be familiar with the novels. One bit of compression that takes the place of pages of exposition suggests “Blow-Up” mingled with the brief clip that exists of Anne Frank turning her head as seen in a window: it’s the sort of creative solution that lands its own punch. 151m. (Ray Pride)

“The Girl With The Dragon Tattoo” opens Friday at Landmark Century and Landmark Renaissance in Highland Park.