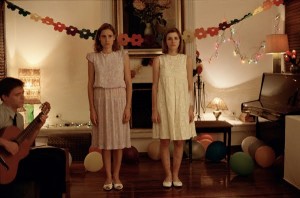 Sylvie Testud, an axiom of contemporary French cinema, a waif of steel, has made her bold mark in movies like “La France” (Serge Bozon’s lovely, bizarre musical, soon on DVD). In one of this week’s highlights from Siskel’s European Union Film Festival, “Lourdes” (Sat, Thu), she plays a paraplegic in a wheelchair who travels to the city of miracles; in Austrian director Jessica Hausner’s small film, Testud conveys grace in even her most reserved expressions. French writer-director Jacques Doillon’s (“Ponette”) first film in five years, “Just Anybody” (Fri, Wed), posits a messy ménage-a-trois that involves a young woman, a deadbeat dad-cum-drifter and a policeman in a seaside setting who takes note of them. Shooting digitally, Doillon is able to accentuate the fervor of his dialogue-heavy, actor-attentive style. The intimacy of the long takes impresses. Film critic and historian Peter von Bagh’s “Helsinki Forever” (Wed), presented by freelance critic Jonathan Rosenbaum, is a poetic city symphony and cinema-essay, drawing on archival and fictional footage, with twinned male and female narration, in a league with Terence Davies’ Liverpool lullaby, “Of Time And The City.” The cumulative impact is ravishing. The true treasure is Yorgos Lanthimos’ “Dogtooth” (Fri, Mon; pictured), an unexpected gem of Greek black comedy, made with an uncommonly assured hand. A wealthy industrialist and his wife keep their grown children in a compound away from the outside world; things have odd names and superstition abounds. Lanthimos’ work harks back to classics of cinematic surrealism, but never becomes pastiche: its oddities are earned, touching and shocking at once.  (Ray Pride)