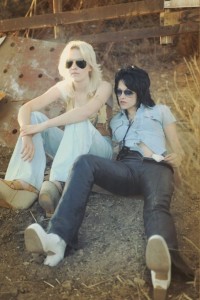 “These bitches suck” was Creem magazine’s timeless takedown of The Runaways when the teenage girl band bobbed to the surface of the 1970s.

In Floria Sigismondi’s writing-directing debut, the making-of-the-band, life-on-the-road, taking-of-the-drugs telling of 1970s teen rockers who made it right to the middle (despite mostly sucking, musically) has the right attitude if not a fully fleshed story. It satisfies in bursts, like an erratically track-sequenced album. Based on Cherie Currie’s slim memoir, “Neon Angel,” “The Runaways” is episodic, and Currie’s decline isn’t as interesting as 15-year-old Dakota Fanning’s embodiment of her rapid slip-slide into neurasthenia and diva-dom. (Fanning’s turn-on-a-dime from sullen to sneering as the band assembles the song “Cherry Bomb” is one of her best moments: “Ch. Ch. Ch. CHERRY BOMB!”) Joan Jett’s survival instincts are more indicated than dramatized, and Kristen Stewart, while as watchable as ever, brings more spark than fire. Michael Shannon, playing oddball Svengali Kim Fowley, is bright and funny as a leering loon, but he’s a man we ought to be fearful of as much as mesmerized by. (Shannon’s memorably theatrical styling of lines like “I am the luckiest dogfucker in space!” are more Walkenesque than truly loony.)

Conveying the fire of live performance and rock ‘n’ roll’s more Dionysian aspects isn’t easy and Sigismondi does her best work in observations about the characters’ extreme youth and poor judgment in the smallest moments. She starts with a promising “splat!,” dark, dirty, damp pavement in close-up assaulted by a patch of ruby-red. Not a painter in her studio, but the first furious glob of a girl’s first menstrual period. Two girls are drinking and smoking on side streets and the first thing said after that: “Why are you always first!” A little later, Jett’s in a vintage store and the female owner takes a moment from her conversation with a biker guy at the counter to make fun of her. She dumps a sack of change and a few bills on the glass counter and points to the man’s black leather jacket. “I want what he’s wearing.” Yes: uniform begun, she hits the street in her new leather and filthy black Chuck Taylors. There are many sharp strokes capturing Jett’s ongoing identity formation. Currie’s burdened with subplots of the jealous sister and an alcoholic father, but when the small, willowy Fanning makes herself up as Ziggy-era Bowie and leans herself up against a wall in a club, her large, grave azure eyes tell you everything: I am naïve enough to think I can take on the world. Under the yet-to-be-restored Hollywood sign, the girls suck down stolen liquor. They could’ve escaped from “Rebel Without a Cause” in both wardrobe and fucked-uppedness. Another small touch: Fowley’s proclamation, “You bitches are gonna be bigger than the Beatles!” And a beat like all the air’s sucked out of the room, met with one word: “Cool.”

Co-producer Art Linson was one of the producers of “Fight Club,” and there’s a fair amount of the right kind of bad attitude that film represents, but without David Fincher’s experience (or budget), Sigismondi needs to indicate what she can’t recreate of late 1970s Southern California, with the able help of Oscar-winning production designer Eugenio Caballero (“Pan’s Labyrinth”). A big-in-Japan sequence includes an oversized limo coursing beneath an underpass that looks suspiciously like downtown Los Angeles; the effect is less cheap than a stroke like how Tarkovsky used Tokyo traffic to indicate the future cities of “Solaris.” Overhead shots abound: are the girls in the band trapped by the limits of their experience or is God laughing? Pretty much the same thing.

Discovering Currie’s age, Fowley exults, “Jail-fucking-bait. Jack-fucking-pot!” “The Runaways” teases at danger but pulls back. This is a gentle haunted house. Currie and Jett become lovers. The first kiss between them takes place on a hotel bed while Currie’s wearing rollerskates, but Sigismondi’s flurries of edits are as feathery as the girl’s shag haircuts. It’s tender-puppy stuff instead of from the gut. In interviews, Stewart has marveled at the fact that their same-sex kiss had to be supervised. ” “She was 15, and I wasn’t allowed to grope her,” the 19-year-old Stewart was quoted by several outlets attending a press junket. I’m actually not kidding, there are major restrictions that I don’t remember when I was younger.” Sigismondi gets her own memories, or imaginings, or what it was to be younger right in so many moments, before a woman realizes she’s becoming “a really bruised peach,” but the demons of rock ‘n’ roll will have to wait for another movie less constrained by the choice to hold to predictable history. Sigismondi’s Ziggy, that’s a movie I’d like to see. Bend those genders some more, please.