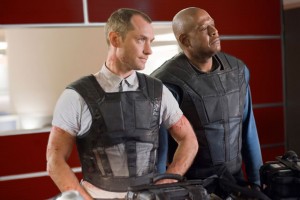 This buddy pic about loyalty in the workplace is based upon Eric Garcia’s novel “The Repossession Mambo.” (It’s not a pluralized sequel to 1984’s “Repo Man.”) In the near future, when there’s a “global recession” and an overseas war called Operation Hope Springs Eternal, an organ transplant company called The Union– “Helping You Get More You Out of You”– employs back-office repo men to extract hearts, kidneys, livers, lungs and other body parts with its barcodes from clients in arrears. A pancreas can set you back $618,429 with a 19.6 percent APR. I didn’t catch the price of the 5.5 Neural Net. After a ninety-six-day grace period, your transplant turns into a loaner. “It was never a horror film,” claims Garcia, who co-wrote the screenplay with TV producer–writer Garrett Lerner. “The original was always a comedy.” Miguel Sapochnik directs this anti-corporate thriller with scapel action that elicits multiple squirms per centimeter of incision. In the recent “Daybreakers,” a minority population was hunted by militarized capitalists for its blood; in “Repo Men” it’s ex-military going after their organs. Garcia and Lerner are no allegorists of bloodsucking usurers, though. They only come up with mediocre double-entendres about changes of heart and changing minds. Those literal and figurative changes happen to Remy (Jude Law) and his co-worker Jake (Forest Whitaker). Remy’s wife wants him to take a pay cut, transfer to sales and spend more time at home with their young son. Jake, who flunked the fourth grade at least twice, is the son of a bank robber. He sees his own calling as upholding the social contract, one defaulter at a time. Jake says: “A job is just a job, right?” Remy, narrating a memoir he’s banging out on an old Smith-Corona, differs: “A job is not just a job.” The plot turns on Jake’s extreme measures to keep Remy at his side. Wishful thinking meets awful screenwriting near the end when we hear nnrr-zzitch-[beep] [static]-hhmm and notice scan lines of video jitter-freeze-skip- reset. Same thing happens to the Universal Pictures logo at the beginning. Same thing used in “The Matrix,” “The Truman Show,” “Vanilla Sky” and other films that signal us that what-looks-like-reality is really a digital mirage or some cunningly engineered hallucination experiencing a voltaic hiccup. Thankfully, neither Universal Pictures nor its proxy, The Union, can repossess your brain if you get behind in paying attention to its product. With Liev Schreiber, Alice Braga, Carice van Houten, Chandler Canterbury and The RZA. 111m. (Bill Stamets)