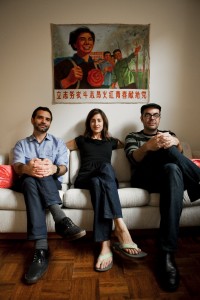 In trying to share some personal favorites from The Chicago Short Film Brigade’s season premiere at the Hideout this week, curator-executive director Xan Aranda struggles to stop herself, laughing, “I love them all.” And the lineup is impressive, with two shorts from Al Jarnow, an animation from Lyle Pisio and many more. “The idea is that we are very aware that you can watch short films on your laptop or your iPod,” says Aranda of the Brigade’s mission. “We really like the idea of people leaving their houses, and laughing and being critical together.” Aranda also aims to get short films out of their usual festival and university circuits. Ergo the Hideout, with its decidedly non-academic and more relaxing environs. “We want to remove that barrier. People are like ‘What, I can drink beer and watch shorts?’ It’s meant to be as unpretentious as possible, but very high quality,” says Aranda. She warns that previous shows have sold out, and encourages people to preorder $8 tickets for Thursday (8:30pm) and Sunday (6pm) at filmbrigade.com. The night, Aranda promises metaphorically, will be “a really good meal made up of a lot of really good snacks.” (Peter Cavanaugh)