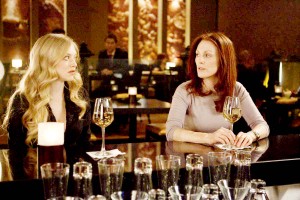 But after working on a screenplay with screenwriter Erin Cressida Wilson (“Secretary”), the director of “Ghostbusters” decided the story might better suit fellow Canadian Atom Egoyan, whose “Exotica” he admired. Egoyan’s dense, cool, yet luxuriantly imagined movies play tricks with time and perspective, but this script is linear. Catherine (Julianne Moore), a Toronto gynecologist, suspects her music-professor husband David (Liam Neeson) has been cheating on her, and she hires a young call girl (Amanda Seyfried) she encounters in a bar in the city’s pricey, middle-aged Yorkville district to reveal how far he might go with flirtation. The greater flirtation in Wilson’s juicy script is with absurdity, but what’s on screen is the most compelling, even hypnotic Egoyan film in years. What I wrote about last year’s “Adoration” was steeped in disillusionment, but “Chloe” has its own integrity—it’s only about prostitution. Concerns that recur in Egoyan’s work, about  technology, generational distrust and misunderstanding, and what a character in “Exotica” calls “a schoolgirl’s special essence” are patterned in the film’s sleek fabric. Egoyan shoots Toronto as itself in mid-winter, refracting the characters’ emotional dance through the luxe of the capitol of Canadian capital.

In the saucer-eyed form of Seyfried, Chloe is Scheherazade as kewpie, another one of Egoyan’s endangered yet dangerous young women. Her seduction technique is storytelling. Everyone projects, spinning off multiple forms of seduction, prostitution, interpersonal drama, persona; it’s all about the telling. Egoyan and I talk fast in stops and starts, but talking last week, the fragments added up as I threw out that idea. “Yes, it’s such a dense… Why she’s doing what she’s doing, I think there are these competing fantasy structures that both women have with each other. As much as Catherine is hiring her to be a surrogate to connect her with an erotic relationship that she’s lost, why would you hire a prostitute and not a private investigator? Because you want to know what the experience is, of who your husband, your lover, actually is with someone else. You want to know the details of that. Then she becomes completely obsessed with that. But Chloe, I think… falling in love is feeling that someone is hearing your story for the first time. When she starts telling these stories, she’s also talking about herself, not [about being] with Catherine’s husband, but she was with these tricks in these rooms and in the greenhouse [where a major betrayal is suggested through walls of glass]. That’s why she’s so specific. She’s specific because she now gets to be in a hotel room, someone pays her, leaves, pays her to forget. She gets called by this incredibly gorgeous, glamorous older woman who’s so respectable, she can tell her exactly what’s happened in this room, with someone else. But it dignifies… and it creates this sense that what she’s saying is worthwhile, and she’s never felt that before. That becomes very overwhelming for her to the point where, I mean, she must know what those boundaries are, but she’s forgotten what the controlling premise is here. It’s so real for her, she says. So yes, it is of a piece with the other films, where there is a Scheherazade element. In the other films, these people need to tell a story for a very particular reason. Someone else needs to hear this for a reason.”

The work-for-hire “Chloe” came together almost immediately, shooting in February and March of 2009 and premiering at Toronto’s film festival last fall. Of the current marketplace for small movies like his, Egoyan reflects, “Yeah. Yeah. It’s weird, it’s sad now, it’s a bit like after ‘Exotica,’ where you have something which people perceive as being more commercial, material that gets sent, and it’s like really awful. There’s something very specific that this one hit, and that was fortunate. Then the means of making it was fortunate, but that’s rare.”

“Chloe” winds up being about how story and persona can seduce anyone, you can see it on Seyfried’s face, we see Chloe seducing herself in her first report to Catherine, lit with white light coming off snow from the street outside. “That’s essential to the genre. I think I’m used to—for my films, which are tough narratives, they’re tough, they’re tall orders for any viewer, with my team, certainly with Mychael Danna [the composer] and Paul Sarossy [Egoyan’s cameraman], we’ve made these films as seductive as possible because we need to draw people in. It’s tough, what they’re expected to do. The question with this film was, do we turn the dial down, because, actually, it’s linear? No. All of those things we would use visually and sonically to draw the viewer in, to hypnotize them, let’s sustain that. That’s why I think it has this feeling that you’re in… Honestly, that’s why I was hired. When Ivan said how much he liked ‘Exotica,’ I said ‘Exotica’ is that way because of the way it’s constructed. And he said, ‘No, it’s also the way it looks.’ He wanted that kind of attention [to mood and milieu], and he wanted that feel. And I was invited to bring that in. So it’s not, even though it feels natural, [‘Chloe’] is not naturalistic or naturalistically lit. It’s concentrated.”