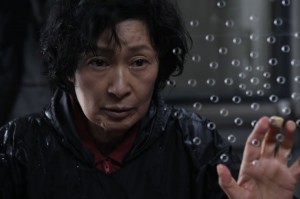 Bong Joon-ho’s follow-up to “The Host” surfaces a different monster: perhaps it’s a clutching mom, perhaps the unknowability of even those closest to you. In “Mother,” (Madeo) the 40-year-old South Korean writer-director continues to grow more confident in mixing tones, from terror to comedy, from pity to pitiful, from delight to fright. He even opens with a Kitano-esque sequence where the never-named mother (the enthralling Hye-ja Kim, known for maternal roles in her country, harrowingly intense and vital here) is crossing a vast field of dry grass, a foggy field where some yet-unspecified sorrow turns to a privileged moment where she begins to dance in a kind of techno-calypso music only she (and we) can hear. “Mother” will return to that scene, but first we learn of her uncommon devotion to her grown, simple son (played by Bin Won, whose cuteness is used with great irony). From her feudal-seeming herb shop, the mother watches over her son through a doorway into the modern world: chopping sheafs of sage, a drop of her blood falls as her son is lightly struck by a passing car. Sound and light and frame deepen every scene. Complications grow, and he’s accused of killing a young girl. As he’s jailed, she conducts her own investigation of the murder. “Mother” approaches the intensity of Shohei Imamura’s great “Vengeance is Mine,” but Bong’s mix of bumptious humor and strong plotting makes for a more eccentric mix, leading to a musical climax that’s the cinematic equivalent of acupuncture, releasing all the knots, gliding into a glorious sunset. 126m. (Ray Pride)