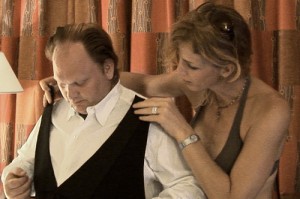 Prodigious sibling rivalries are the fuel to the fires of “Prodigal Sons,” a wondrous documentary that’s ten times as complex emotionally as Jonathan Caouette’s “Tarnation.” It’s a feat and a treat. Kimberly Reed’s film is the kind of jam-packed experience that’s a joy to behold if you aren’t clued in to some of its larger turns: it may be enough to start with the very tall Reed’s return to her small Montana hometown, hoping to reconcile with her adoptive younger brother as he recovers from a head injury. Reed, as it goes, was the high-school class president, valedictorian and captain of the football team. Reed’s transgender now, her brother is gay and their adoptive older brother, over the course of the movie, discovers that his bloodline is exotic in the extreme. Oh, I do want to tell you. I think it would be fun to ruin a perfect story… A head-spinning drama rife with revelations, “Prodigal Sons” is too true to be good: compelling, distressing, it’s pretty great. T. Griffin’s score is among the memorable elements of an impressively crafted debut feature. 86m. DigiBeta. (Ray Pride)