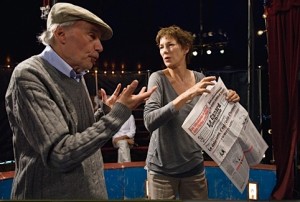 Highlights of the final week of the 13th European Union Film Festival at Siskel include Bruno Dumont’s “Hadewijch,” (Sat, Wed) and Jacques Rivette’s “Around a Small Mountain” (Sun-Mon). Dumont’s provocations have ranged from the murders of “L’humanite” to the sex-crazed “Twenty-nine Palms,” yet there’s something in his latest, a study of the boundaries of belief and fanaticism in Europe today, seen through the eyes of a teenage girl shunned from becoming a nun, who takes up with other religions in unexpected ways. Dumont delivers potent shocks, but the most potent aspect of all is his attention to faces and to light: I’m not sure about the coherence of the underlying ideas, but the images are filled with mystery and concentration. Eighty-year old Jacques Rivette’s “Around A Small Mountain,” runs hardly eighty minutes, and its slightness echoes his lifelong fascination with acting and role-playing. The last shot placidly observes as a full moon is slowly occluded by glaucous clouds: the clouding of sight, memory, the pulling of a final curtain. There’s also a  repeat of Peter Bagh’s “Helsinki Forever” (Sun), memorable a poetic city symphony and cinema-essay, drawing on archival and fictional footage of the surprisingly much-observed location. (Ray Pride)

For a full schedule, go to siskelfilmcenter.org.