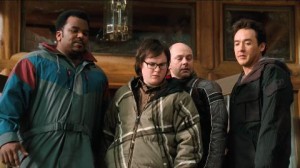 The otherwise smart-sounding John Cusack variously calls this time-wasting time-travel comedy “very” and “kind of” “smart,” “dumb” and “postmodern.” High-school pal Steve Pink (who co-wrote “Grosse Pointe Blank” and “High Fidelity”) directs a screenplay by Josh Heald, Sean Anders and John Morris that’s self-conscious in kind of very little ways about Hollywood genre comedy. Cusack plays the smartest guy on a getaway with two pals and his nephew, who was conceived in 1986 at a ski lodge. That happens to be the precise destination of this outing by these two generations of infantile straight males with really big penis issues. They hop in a hot tub and turn up in 1986. The younger selves of the three older men appear only in a few mirror scenes; we see them as they are in the present. Everyone in 1986 sees them as they were then. How do they confirm when they are? Ask someone what color Michael Jackson is. “Black” is the answer that fits with Reagan on TV, legwarmers and cassette players. “I feel 19 again,” crows one. “I want to fuck something.” Space-time shit comes down to lines like: “Step on a bug and the internet is not invented” and “Are we going to make Hitler president?” “Hot Tub Time Machine” is not timeless humor at all. With Clark Duke, Craig Robinson, Rob Corddry, Sebastian Stan, Lyndsy Fonseca, Crispin Glover, Chevy Chase. 93m. (Bill Stamets)