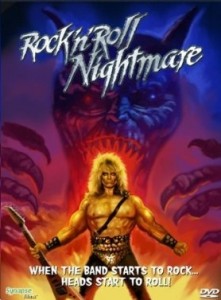 “How on earth could a group of adults be involved in something so stupid?” is the question Jarrett Spiegel hopes viewers have leaving a “Bad Meaning Good” event. With their twelfth installment showing at The Burlington in Logan Square (3425 West Fullerton) on April 5, “Bad Meaning Good” will celebrate its first anniversary of showcasing achievements in cinematic futility. “Bad Meaning Good” was founded by Spiegel and fellow film buff Jason Deuchler after they, while drinking one night, began to talk about how many legitimately terrible films they had each seen. The monthly showcases spawned by that conversation display some of the worst of film failures across different genres. Past installments have included a martial-arts double feature: “Samurai Cop” and “Riki-Oh: The Story of Ricky” and last July, the cult favorite “The Room.” “There’s something endearing about a movie where everyone involved is trying their hardest and failing on every level,” Spiegel says. “We try to play stuff that is less self-conscious of its badness. A movie like “Snakes on a Plane” is trying way too hard to manufacture that camp appeal.” Viewers at the screenings, on the first Monday of the month, are encouraged to heckle the films and find ways to take pleasure in the overall stupidity on screen. Hosted by John Wilson, the event began as just a bad-movie night with some of Spiegel’s and Deuchler’s friends and has become bigger and badder each month. The April installment of “the very worst rock ‘n’ roll themed horror trash”—with “Hard Rock Zombies” at 8pm and John Fasano’s 1987 directorial debut, “Rock ‘N’ Roll Nightmare,” at 10pm—will be followed by music until close provided by DJ’s Popstatic [Spiegel] and Intel [Deuchler]. The event is free and will include some surprises in celebration of a year of trash films. (Andrew Rhoades)

[…] This post was mentioned on Twitter by djintel, Jarrett Spiegel. Jarrett Spiegel said: Check out this nice little write up in New City for next week's Bad Meaning Good anniversary: http://tinyurl.com/yzl8udc […]