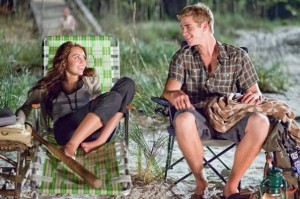 Miley Cyrus is a fan of Nicholas Sparks, so she asked the novelist to write her a vehicle for breaking out from her singing Disney persona of “Hannah Montana: The Movie.” Sparks even let Miley pick her character’s name, Ronnie. This slightly troubled New York teen is a classically trained pianist with black fingernail polish and a minor shoplifting charge. Dealing badly with her parents’ divorce, she rebelled by getting every single answer wrong on her SAT test. Her mom (Kelly Preston), about to remarry, drives Ronnie and her annoying little brother (Bobby Coleman) down to a Georgia island to spend the summer with their dad (Greg Kinnear), who’s moved to a beach house not too far from a recently fire-damaged church. Sparks writes bestsellers with a knack for heartache and tearducts, but “The Last Song” is a weaker bittersweet weepie than the screen adaptations of “Dear John” and “The Notebook.” Once again he delivers young romance, a coastal Atlantic locale, a touch of class friction, heartfelt letters, sad hospital scenes and trite animal metaphors. In “Dear John” the love story started during college spring break. In “The Last Song,” it starts the summer before college when Ronnie meets Will (Liam Hemsworth). “Dear John” was titled after the first two words of one special letter. “The Last Song,” whose title refers to a song called “For Ronnie,” sports nineteen unopened letters, down from 365 in “The Notebook,” a summer romance hooked to the handwritten tale in the title. (Sparks fans will note that seven years is his preferred interval for separating young lovers in wartime.) The screenplay by Sparks and Jeff Van Wie tracks with the novel by keeping Ronnie reading “Anna Karenina,” but curiously replaces her dad’s Bible with a Buddha statue in the mise-en-scène. Cute baby sea turtles replace the horses and migratory fowl in earlier Sparks films. Besides overused musical montages, director Julie Anne Robinson unbelievably cuts from shots of water dripping from an overturned glass beside a terminally ill character, to tears of another character who figures out what that means, to rain drops. Such by-the-numbers sentimentality is godawful. With Hallock Beals, Nick Lashaway, Carly Chaikin, Nick Searcy, Kate Vernon. 108m. (Bill Stamets)