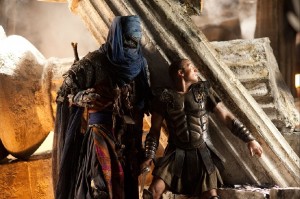 Harper’s runs ads that promise the magazine has no “content.” Turning to film, with digital 3-D projection retrofitted onto most of the studios’ biggest projects, I wonder if we’re talking “movies,” “product” or just “data.”

I was content not to preview the 3-D converted version of “Clash of the Titans,” which was shot to be shown in 35mm and digital projection. It’s a remake of the 1981 hunka-hunka burning cheese that was graced with the last of Ray Harryhausen’s captivating stop-motion animation. Stop-motion: that stuff artists painstakingly do with their hands?

User interfaces have taken us far enough from data, from the fact that the “cloud” of information out there that rains down ones and zeroes in insistent succession, to allow us to forget just how far the electronic is from the photochemical and the mechanical, from miles of celluloid unspooling through an early twentieth-century device called a “projector.” When does it get real, tactile again? When hard-earned money passes through the window, $11 for most movies before the 3-D premium. That’s tactile. That’s what we’re doing with our hands.

But what of the filmmakers’ hand? Hollywood emeritus Richard D. Zanuck, the 75-year-old producer of “The Sting,” “Jaws” and Tim Burton’s “Alice In Wonderland” (closing in on $660 million as of Monday), as well as “Clash of the Titans,” told Saturday’s Times of London that until “‘Oh, about five weeks ago, ‘Titans’ was in 2-D, and frankly after ‘Avatar,’ 3-D mania swept over Hollywood when they realized people were willing to pay a couple of bucks or pounds extra to see these versions. So we converted the picture from 2-D to 3-D.” The estimated cost of the non-native, rushed process to convert the movie is $5 million or so. (James Cameron has had a thing or two to say about this short-cut process as well.) But Zanuck further tells the Times, “Three dimensional mania may be a permanent condition, but if it’s overused, it will no longer be a thrill.”

Even without the added “mania,” “Clash” is more amusement-park hullabaloo than storytelling. If you’re too young to know earlier iterations of the story, the script helpfully has characters call each other by their names in almost every scene. Oh daydreaming, absent-minded gods! Directed by Louis Leterrier (“Unleashed,” “Transporter 2,” “The Incredible Hulk”), this “Clash” features Liam Neeson as Zeus, Ralph Fiennes as Hades whooshing up from the underworld, and Sam Worthington as a bastard demi-god. As Perseus, Worthington plays history’s first skirty jarhead, his mid-thigh pleated garment often whoopsying-up in sudden wind. He’s the only character with an Aussie accent: “I’m just a mien,” the man oft protests.

The script tailors elemental patriarchal and parricidal myths to work their special magic on unsuspecting young boys. It’s no “Unleashed,” where Leterrier, even in the trimmed U.S. version, demonstrated skill with the camera. A circling, circling camera punctuates the muddy setpieces, as if from the point-of-view of a guided-tour speedboat. I’d hoped for “Mad Max Beyond Olympus” or what you’d imagine a visionary of trash and sputter like Rithard Stanley (“Hardware,” “Dust Devil”) might do with piles of cash like these.

Mentally, it’s hard not to be halfway out the door ten minutes in when a “Clash of the Titans,” turns out to be an immediate jumble. Hopes stay high that lines like “If the Kraken can be killed, the Stygian witches will know how” will be delivered with panache or at least inflections of actorly ganache. But the only comedy that doesn’t fall flat may be “Ahem. We’re nearing Medusa’s lair.” The movie is gravely deficient in the Vitamins C: Camp and Charm. “You were born to kill the Kraken!” falls flat. (And the Kraken? I guess no one’s been born to animate it yet.) “Zeus’ seed in your wife survived” is pretty punchy. And snort-worthy is “The Pegasus, no man has ever ridden one, it’s a message.” Is it the same message as Worthington’s bonding with a winged beast in “Avatar”?

Try as he might, Worthington is no Jason Statham. Statham’s torso as a physical assertion in his action roles is far more impressive than the endless citations here of Worthington’s thighs and calves. Villainy is measured in gradations of eye shadow. Small roles for men under 30 seem uniformly cast as bicycle messengers with crusty shoulder-length dreads. As Io, cursed with eternal youth and the job of watching over Perseus’ persecutions, Gemma Artherton is incongruously dressed as if she just came from the Argos Hot Topic, with a 1980s-style sidelong topknot and pale pudgy knees peeking becomingly below a white skirt. All that’s missing are magenta leg warmers. Artherton is often shot in a medium close-up, smiling apart from the other actors and action in the scene. Her lips glisten nicely.

Meanwhile, back on Olympus, the joint looks a lot like Xanadu, with Liam Neeson’s Zeus feathered with light like Olivia Newton-John on roller-skates while Ralph Fiennes’ Hades is masquerading as John Travolta from “Battlefield Earth” after a refreshing soak in 10W-30. There is an ah-OOGAH! Large Marge moment. A ferry to the underworld looks as if Frank Gehry worked in wormy driftwood and stacked char. Small diversions. But inadvertently, the most memorable, and most topical, moment may be when, in the desert, an elder wipes his hands on an epicene young soldier’s hem, like in the recent YouTube clip that found former President Bush shaking a Haitian’s hand and then daubing his palm on former President Clinton’s shirt. In a split second, a timeless vision of privilege. Now that’s content!