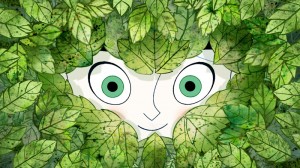 Tomm Moore’s medieval-era fantasy “The Secret of Kells,” mingling Celtic myth and the history of the four gospels, the underdog of the 2009 Oscar animation race (won by “Up”), is a beautifully designed Irish eyeful. Produced on a larger scale than Nina Paley’s hand-crafted “Sita Sings the Blues,” “The Secret of Kells” is still a similar celebration of styles of illustration that have been neglected in the rush to expensive computer-generated animated feature films. I’ve grown increasingly fond of “Fantastic Mr. Fox,” another of the nominees, but there’s a lack of pop-culture gewgaws and gentleness and all-round glow to the doomed forest of “Kells” that satisfies in this luminous, swirling treat. Curlicues unite! With the voices of Mick Lally, Evan McGuire, Christen Mooney, Brendan Gleeson. Among the producers’ credits are “Kirikou and the Sorceress” and “The Triplets of Belleville.” 75m. 35mm. (Ray Pride)

“The Secret of Kells” opens Friday at Siskel.