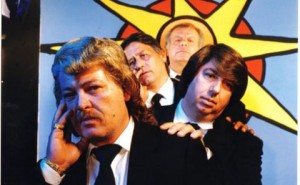 (Tano Da Morire) Roberta Torre’s 1997 molto kitschy musical, “To Die For Tano,” recounts the life of Tano Guarassi, a Palermo butcher and small-time Mafia enforcer who gets hit by the Corleone crime family. For the first few reels, the bizarre musical results of his four sisters and characters drawn from the real-life neighborhood are fascinating, but the Neapolitan nonsense and the mad, motley score by Nino D’Angelo aren’t likely to convince every moviegoer his rise and fall were worth the recounting. While it was a hit on its home turf and an award-winner way back at the end of the twentieth century, think of this “trash musical” as extremely uncomfortable karaoke, and you have a small notion of the in-your-face experience. It’s a surreal provocation even when you don’t know what the hell’s going on. Plus mullets. Lots of mullets. With Ciccio Guarino, Enzo Paglino. (Sample “Tano’s Rap” below.) 75m. 35mm. (Ray Pride)

“To Die For Tano” opens Friday at Facets.