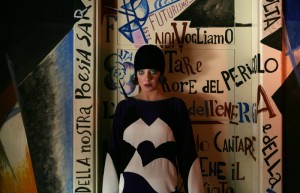 “Extravagant” would be so much an understatement it would be damning with faint praise when it comes to the latest film by 70-year-old Italian director Marco Bellocchio (“Fists in Pocket,” 1965; “Devil in the Flesh,” 1986; “My Mother’s Smile,” 2002). Under the rule of Berlusconi, younger directors are turning out fierce, stylized work, such as Matteo Garrone’s “Gomorrah” and Paolo Sorrentino’s “Il Divo” (both 2008). Yet the elder Bellocchio’s fictionalizing of the story of Mussolini’s secret wife and son shortly after the turn of the twentieth century, the gorgeously shot and melodramatically enacted “Vincere” (Win), is even more searing, more tantalizing in the telling than their estimable accomplishments. From the opening scene where the young, handsome, mustachioed, fulminating future Il Duce (Filippo Timi) challenges God to strike him down at a public meeting and he catches the eye of a young woman (Giovanna Mezzogiorno), Bellocchio is in command of his craft as a filmmaker. Timi and Mezzogiorno, too: sparks strike, erotic conspiracy results. Then the director’s kinetic, kaleidoscopic play begins, cutting through eras with alacrity and narrative daring. Vibrant period stock footage is used in a way the Futurists would have appreciated: it is the dream of the era, the dream of the man who will define the era; dream and dreamer alike. (It’s similar to the great accomplishment of Stuart Cooper’s “Overlord.”) The man is destined for self-possession: Sleeplessness after orgasm can lead only the nude young Mussolini to striding onto a balcony, imagining a future with thousands in a square. “When I see a priest, I feel the need to wash my hands” is a typical aside, capturing the rhetoric of the moment. But the arguments about revolution, socialism, armed proletarians, corrupt Popes and the heartlessness of the most powerful seem less historical than timeless allegory. Fascism finds its form, whatever it may be called or calls itself. Bellocchio finds formal bombast to match the character of the terrible center of his story, of Italy’s twentieth century. It’s scorching and mesmerizing, even devastating, and I’d love to see it again right now. The gorgeous, rumbustious score is by Carlo Crivelli. With Corrado Invernizzi, Fausto Russo Alesi, Michela Cescon, Pier Giorgio Bellocchio, Paolo Pierobon, Bruno Cariello, Francesca Picozza, Simona Nobili. 128m. (Ray Pride)