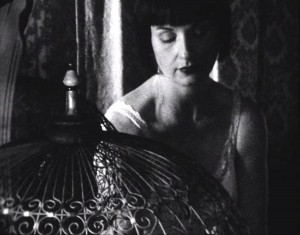 The movies have a great future behind them.

Circumstances are ripe for upstart filmmakers to define what the movies are for years to come, if only new kinds of storytelling and models of distribution emerge. “The Pink Hotel,” the first feature by Chicago filmmaker (and Kalamazoo native) Chris Hefner, 26, takes a loving look back to a past that never existed—both in cinema and in Chicago landmarks including the Music Box (which comes off as a threadbare Marienbad). Shot in Super-8 black-and-white reversal film and set in a luxury hotel filled with strange tenants with stranger dreams, “The Pink Hotel”‘s 1930s-that-never-was is steeped in dread and fear, slippery as smoke and elusive as cryptic, recurring dreams.

Begun over the past three and produced in the last year, Hefner worked in bursts between his day job as an art handler, usually at the MCA, but with occasional freelance gigs at art fairs and other museums. “I’ve been making shorts for several years,” Hefner told me over the weekend, “and had developed a vocabulary for how I put those together. I felt antsy to see myself develop things further, rather than keep doing what had become fairly easy for me. I think a lot of the drive behind the production came from my feeling that if I didn’t do it, and do it now, then I would feel stagnant and lazy.”

What would laziness mean to the work? “One of my biggest fears is being lazy about things, falling into mediocrity or complacency. So, for better or worse, I think anxiety probably had a lot to do with it. Or avoidance of anxiety.”

The anxiety of production came from its stops-and-starts, “dictated by when people were available to be on camera, build sets, or when locations were free (both free of commitment and free of charge). For the most part, it was a very nights-and-weekends affair for everyone involved. [My friends and I have] weeks of nine-to-five-ing, and weeks of time off to focus on things.”

An exceedingly modest, yet ambitious film like “The Pink Hotel” still needs some money to get made. “The production cost was just out of pocket and through generous donations of friends, mostly via fundraiser evenings we put together throughout production. These range from our first, which was a show at the Hideout featuring music by Daniel Knox, in whose band I play musical saw, shadow puppetry, short films, and so on, to an evening at the now sadly defunct Finch Gallery in January. I wanted to keep the energy behind the film as ground-level as possible.”

The storytelling itself, however, holds sinister desire. There’s a touch of micro-budget von Sternberg (minus Dietrich) meets Guy Maddin with bits of David Lynch-like weirdness. “Fair enough! I’m certainly a Lynch enthusiast. Guy is actually a friend, and we’ll be working together on his new film in Winnipeg next month. He and I have been correspondents and friends for several years, so we do a lot of looking at one another’s work. Of course I’m utterly smitten with what he does. I also watch a lot of early sound and silent pictures, the directness of process and the sheer enthusiasm about the newness of cinema is really something special. I’m also very fond of the Quay Brothers, Joseph Cornell’s films, the early Dada and Surrealist experiments in pictures, Roy Andersson’s lovely work and harbor an almost unconditional love for any horror movie at all. The older the better, I suppose, but I’m not that picky.”

I mention a movie on a parallel track, Bill Morrison’s “Decasia: The State of Decay,” a feature-length montage of found footage, miles and miles of rotting nitrate stock. “I love ‘Decasia,’ absolutely tremendous work!” Hefner says. “I feel like the constant popular push for more invisibility in media stems from the general human fear of decay, of death. Creating more perfect images of ourselves has always been a somewhat pathological obsession for humans, and now we’re beginning to come out the other side of that, meaning that our means are finally starting to outreach our ability to understand and relate to them. I can’t relate to CG [computer-generated images] very well, but I can see a body when I look at film. The constant reminder of corporeality is important, it’s a point of access, something to relate to.”

Hefner intends to play up the Music Box as both location and site of premiere. “There are many points in the film that deal with Chicago history in one way or another, not in an overtly literal sense, but more in the way of simply being haunted by it.” The Pink Hotel’s lobby, with its put-upon concierge, is the lobby of the Music Box. “The feel of antiquity about things will extend outside of simple aesthetics, and into a more inclusive space,” he promises. A memorable moment is when a film director barges in with an entourage and demands service from the concierge in this “pigfucker cowtown.” Hefner pauses. “I guess the Hollywooder’s ‘pigfucker cowtown’ is a little bit of fly-over zone humor. Midwest pride.”