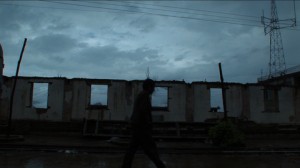 (Fei Cheng) Director-editor-cinematographer Zhao Dayong’s astonishingly gorgeous, achingly sorrowful three-part independent documentary, “Ghost Town” (2008), captures the life and survival of Zhiziluo, a village in remote Southwest China. His work resembles that of his countryman Zhangke Jia and other filmmakers of the current generation working on high-definition video (a format less restricted by the Chinese government than 35mm features intended for theatrical exhibition), all demonstrating by witness, “What is now? What is China? What is the future?” All find the lyric in the mundane: So many stories, so many vistas of physical beauty and dusty ruin. The opening resounds: Children’s voices racket softly across mist-twined mountainside. Second shot: a long take of workers on a street bounded by derelict-seeming workplaces. “Go ahead and film, even though there’s nothing to see here.” Everything that follows harks back to that thematic frame: mystery, beauty, dereliction, activity even where no one is bothering to look in the rubble of the Cultural Revolution. At least until Zhao. The first chapter, “Voices,” follows the local Christian pastor and his father, who studied under Western missionaries in the 1950s. “Recollections” finds a young couple torn: he has opportunities in the city; she may be sold into marriage to help her family. “Innocence” follows a 12-year-old boy without a family. Contradictions abound; complexity eddies from each passage. An American filmmaker I can think of with a similar, patient eye is James Longley, who made “Iraq in Fragments,” not judging, watching, capturing, shaping the results.  Zhao’s director’s statement is fulfilled by his observant gaze: “I wanted to explore the idea of these lost histories and ravaged cultures, and by extension my own cultural identity, by delving into the lives and spirit of the abandoned city.” Wim Wenders has said he finds any shot of a car, or especially, a train, entering the frame from right and moving left, with the shot holding until the vehicle is gone, to be the saddest thing.  The second-from-last shot in “Ghost Town” is of a little black dog crossing in front of a shabby white Mao statue in front of a weathered pagoda. Dog gone, cut to black. Mao looks over the village. A red neon cross atop a church glows under bright moonlight. Time elapses. History gathers. “Ghost Town” is profound in portraying the particulars of generations of villagers and profoundly sad as well. (The film premiered at the 2009 New York Film Festival.) 169m. (Ray Pride)

[…] This post was mentioned on Twitter by Kevin B Lee. Kevin B Lee said: @raypride's yummy review of "astonishingly gorgeous" GHOST TOWN: http://bit.ly/cobJBz Chicago, you know what to do! @dGenerateFilms […]